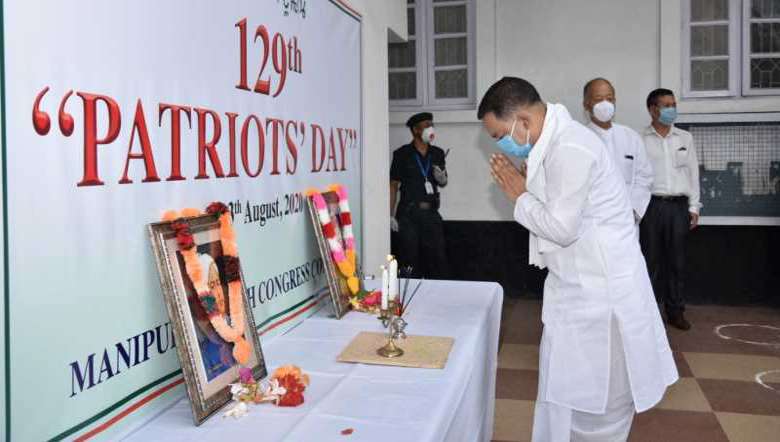 MPCC offers floral tributes to patriots of Manipur on August 13, 2020

People of Manipur should unitedly fight against anything that tries to pull down the integrity of Manipur, said Manipur Pradesh Congress Committee (MPCC) president M Okendro.

Recalling the incident where patriots such as Yubraj Tikendrajit, Paona Brajabhasi and Thangal General were hanged to death by the British at Pheidabung, the president said, "We should not forget that the independent which we are enjoying now is their gift."

Regarding the issues such as the Indo-Naga Framework Agreement, the border pillar, delimitation and others, Okendro said such issues can lead to misunderstanding among the different indigenous people of the state.

It is not right to remain silent when the government is trying to gain political mileage in issues instead of solving the public grievances, he added.

Talking about the current pandemic of COVID-19, the president claimed that it is very unfortunate that the government is taking up their own policy instead of combating the pandemic by joining hands with the public.

Okendro also pointed out the failure of the state government in combating COVID-19 such as turning the green zone into a 'double red' zone and unable to supply healthy diet or supplements to COVID-19 patients.

Asserting that when there are dead cases of pregnant women as hospitals denied treatment and the government taking up only the policy of lockdown and curfew, he said it seems that the government did not see the sufferings of the public.

Okendro added, "If we do not fight any issues collectively and overcome it, then future generations will have a negative image against us."

The function was also attended by former Chief Minister O Ibobi, member of Congress Working Committee Gaikhangam, MLAs and other members of MPCC.

Floral tributes were offered to the patriots who have laid down their lives for the sake of motherland.