COVID-19 patients informed IFP that they have to drain out the water from their room almost every day. 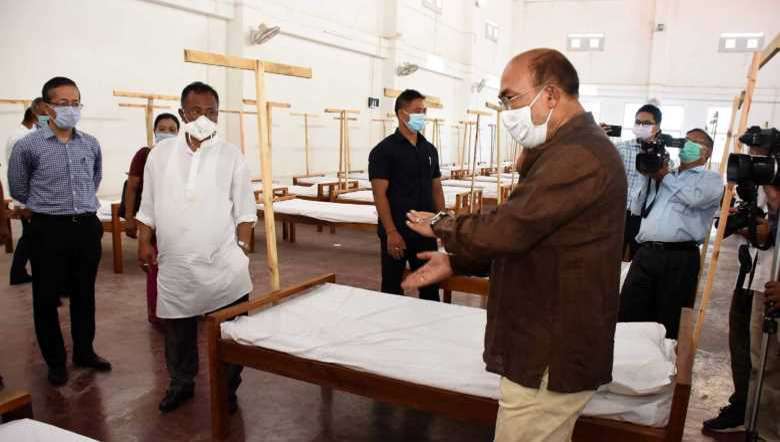 Barely a week of the opening of the COVID Care Centre at Trade and Expo Centre Lamboi Khongnangkhong in Manipur, patients at the centre complained about water from the bathrooms and toilets flowing into their room and leakage of rainwater from the roof.

The patients of the female ward number one informed that they had to drain out the water from their room almost every day. They also said that they were unable to follow the physical distancing guidelines due to all the beds crowded together with little space in between them.

Speaking to the Imphal Free Press, an inmate Memton Khundrakpam said, “We have to drain out the water from the toilet and bathroom flowing inside our room since there is no drainage or other means where the water can flow out”.

They said they understand that the state government is trying its best in dealing with COVID-19 pandemic and even the centre was built in a short period of time, and the foods are served regularly and in time. However, Memton expressed concern about the dirty water from the toilet flowing out into their room.

Another inmate, Hoineo Khongsai said they did not receive medicines regularly. Complaints have been made to the authorities in the centre about the problems but no steps have been initiated yet, she said. She expressed fear that if the water continues to clog and overflow in the rooms, the inmates may even fall sick.

An inmate of male ward number two from the same centre also took to social media and posted a video of the rooms and expressed his disappointment. He alleged that there is no medical facility in the Centre and even the distance between the beds are only about two to two-and-half feet.

Speaking to Imphal Free Press, another inmate from male ward number one also supported the claim made by other inmates that the water from the bathroom flows into their room. He, however, said that the inmates should also take responsibility and do whatever to maintain the centre.

"Who will come and clean the water in the room where the COVID positive persons stay. As a responsible citizen we should also play our part and do whatever we can to help the government in the fight with COVID-19," he expressed.

In male ward number-one, the inmates took the responsibility to clean the water that flows out from the bathroom, if not, the water level will increase, he said.

The authorities have provided us with wipers and phenyl so that the inmates can clean the centre from time to time. If the inmates of female ward number 1 also take the responsibility to clean the water at the right time, there will be no water stagnant in their rooms, he added.

The 300-bedded state COVID Care Centre was inaugurated by Manipur Chief Minister N Biren SIngh on August 3 in the presence of state Health Minister L Jayentakumar and other health department officials. While briefing the media after inaugurating the centre, the chief minister had said that the number of beds in the centre can be upgraded to 1,000 if the need arises.

It may be mentioned that the first COVID Care Centre in Manipur at UNACCO school Meitram started functioning on June 13 with 100 beds.

According to reports, the total number of beds in COVID Care Centres in Manipur is now 1,289, excluding the 300 at Lamboi Khongnangkhong. To deal with the COVID Care Centres, the state government has recruited 100 doctors, 90 nurses and 60 multi-tasking staff.