The sanitation workers told the IFP that hand gloves and hand sanitisers were issued only twice this year and they are yet to get their salary for two months. 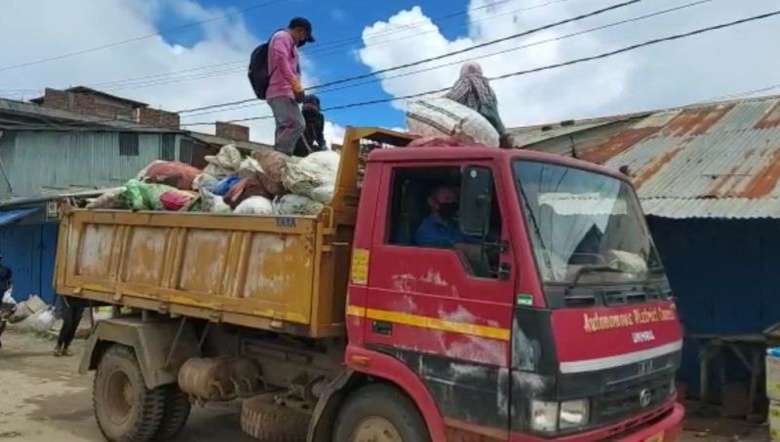 Amid the fight against COVID-19 pandemic in Ukhrul district, Manipur, come rain or shine, sanitation workers in Ukhrul town continue to maintain and keep the town clean. At most times, they have to brave the stormy and rainy weather, which makes it difficult for them to trudge through muddy road from house to house, market places and institutions to office across the town.

The sanitation workers operate under the Small Town Committee of the Autonomous District Council Ukhrul Administration. The district administration has enforced strict lockdown to curb the spread of the pandemic, restricting people from moving outdoors. However, sanitation workers are permitted to continue their job of cleaning the town despite the inclement weather and difficult road condition during the monsoon season in view of the Covid threat.

It may be pointed out that the sanitation workers lack basic protective equipment or gears to protect themselves from any infectious disease, not to mention the COVID-19 that is fast spreading in the district. And currently there are only two dipper trucks to collect the wastes. The third dipper truck is yet to be repaired and has been lying unused for the past many months.

Despite all the setbacks, without wearing basic protective gear, the sanitation workers of ADC Ukhrul Administration go collecting wastes from across the town in two dipper trucks and dispose them of at the disposal site.

However, apart from the inclement weather and the lack of basic protective gear and minimum infrastructure, there is a more concerning issue facing the sanitation workers. They are used to hard work and tough odd jobs, but what troubles them most is their meagre earnings during this Covid times..

Continuing the work during these harsh time has become even more challenging to them as the sanitation workers earn a meagre salary of Rs 5,000 per month while dipper truck drivers are get Rs 7,000 per month, the workers say.

In an interaction with them, the sanitation workers informed theImphal Free Press correspondent that basic gears like boots and rain jackets were not issued this year. They said a few essential items such as hand gloves and hand sanitisers were issued only twice this year and they complain that they are yet to get their salary for two months. Not getting their salary in time is a common and old issue most people in the hill districts face. Without any other source of earnings and no savings, how can they survive and support their families, the sanitation workers ask. They work to earn a few rupees to support their families and for their own survival. But the question of survival is getting tougher as they try to manage with their meagre salary which is often delayed for months.

The sanitation workers also said that they had to procure hand gloves from their own money since the gloves provided by the authority get worn out very fast due to the nature of their work. They need special durable gloves made for the kind of work they do, they said.

Despite their many woes, the sanitation workers go baout picking garbage and waste in the morning at different locations within Ukhrul town. The remaining workers accompanied by two dipper trucks collect the garbage for disposal in the day time as assigned by the administration.

A total of 35 sanitation workers, including three drivers, are employed by the Small Town Committee, ADC Ukhrul Administration, of which 11 of them are permanent and the rest are on contract basis.