mphal West district police along with district commandos conducted an intensified liquor drive unlike the drives conducted before, said SP, Imphal West, K Meghachandra to the 'Imphal Free Press' over the phone. 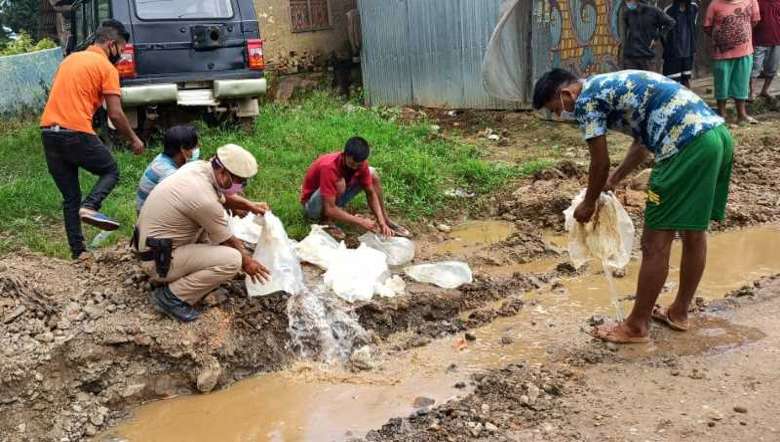 Manipur police have intensified the drive against liquor in various parts of the state following the spike in COVID-19 cases.

Imphal West district police along with district commandos conducted an intensified liquor drive unlike the drives conducted before, said SP, Imphal West, K Meghachandra to the Imphal Free Press over the phone.

Drives were conducted at the western side of Polo ground, Imphal, where 145 bottles of Indian made foreign liquor (IMFL) and 76 beer bottles were seized; Thangmeiband Hijam Dewan Leikai where 42 beers (can and bottle) 2 IMFL bottle and 20 liters of distilled indigenous country liquor (DICL) were seized; Thangmeiband Khomdram Selungba Leikai where 20 bottles of IMFL, 60 beers were seized on Tuesday. The seized liquors and beers were destroyed on the spot with public participation, he said.

In a similar drive conducted on Wednesday, 260 liters of DICL and 10 bottles of IMFL were seized from two different places in New Keithelmanbi.

Meghachandra further said that the liquor drive has been continuing as selling liquor is illegal other than some certain criteria. In the past, the recovered liquors were handed over to the state excise department and necessary legal actions were taken, he said. But the people were apprehensive that the recovered liquor will be misused, he added.

To reduce the apprehension of the public, destroying of recovered liquor with public participation was started. destroying the liquors on the spot can also help prevent from COVID-19 spread, said Meghachandra.

Responding to a query, he said that the 1st and 2nd Manipur Rifles canteen are under the jurisdiction of the state Home department. But as the public has been complaining that the selling of liquors are not banned at the two canteens, he will look into the matter and will discuss it with authority concerned, he added.

Similar drive will be continuing in the next coming days, said Meghachandra.