The people living at the border areas are the guardians of the border and they have been guarding the areas, Ranjan said. 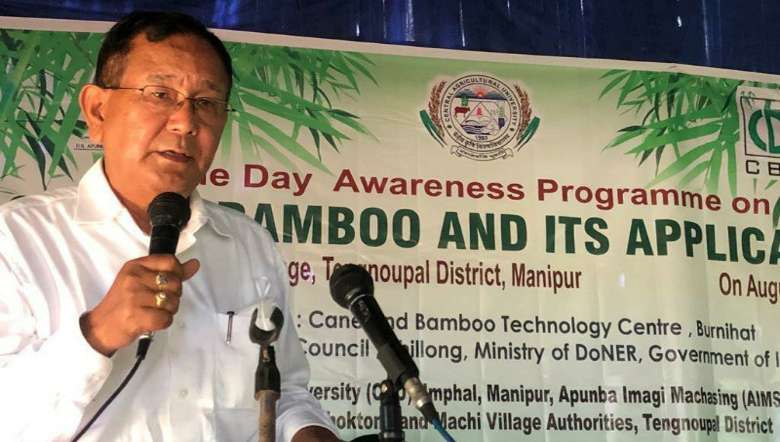 RK Ranjan speaking at the ‘One-day awareness programme on cane and bamboo and its application’ at Nongkam Satang Village, Tengnoupal district (PHOTO: IFP,)

MP RK Ranjan on Tuesday stated that all weather roads are an absolute necessity for border areas as they will boost the economic growth in the areas.

A proposal will be sent to the ministry of road transport and highways through the state government to construct an all-weather road, said Rk Ranjan while attending as the chief guest.

He observed that the people of Maring community are master craftsmen in cane and bamboo products. They have a special talent in this and more awareness is needed to promote them, he remarked.

“The agro-climate of the area is suited for multiple cropping. As the team from CAU have tested the soil, it is suitable for planting litchi and agar trees besides bamboo which are abundantly grown in the area. By planting them, it will help in boosting the economy of the villagers,” he said.

The people living at the border areas are the guardians of the border and they have been guarding the areas, he further said adding he will try to help in all possible ways to boost the economy of the people.

President of the programme, MP Lorho S Pfoze said that the connectivity in the region is extremely poor and there is a need to construct a better road between Lamlong Khunou to Nongkam Satang.

There is an urgent need to make an international market place at Nongkam Satang to develop a formal trade between India and Myanmar, he observed. For this, it is necessary to talk with Burmese and Indian governments, he said.

Vice-chancellor, Central Agricultural University (CAU), professor M Premjit expressed that Nongkam Satang village is a suitable place for Lychee, Coconut, Cane and Bamboo. That is why he is willing to set up a centre for scientific plantation and skill development of these plants at Nongkam Satang in consultation with the Members of Parliament (MPs) present today, he expressed.

Establishment of tissue culture for mass production of nursery plants is also required, he said.

DC, Tengnoupal district Rajkumar Mayanglambam who attended as a guest of honour stated that there is a plan to construct a road between Lamlong  Khunou to Nongkam Satang. He assured that measures will be undertaken to resolve the issues concerning absence of telephone network, lack of health facilities and primary school in the region through a new scheme of the Prime Minister.

The additional superintendent of Police of Tengnoupal district Th Krishnatombi Singh also expressed that right after crossing the border,  all the roads in Myanmar become motorable. But in case of Manipur, there is no road from pillar nos. 71 to 87. Such a situation is also a threat to national security, he observed.

During the programme, hand sanitizers, masks, hydroxide and hand gloves were distributed to the villagers. They were provided by the Directorate of Health Services, Government of Manipur and Manipur University.

Former minister, Morung Makunga was also present as one of the guests of honour of the programme.

The programme was supported by Cane and Bamboo Technology Centre (CBTC), Guwahati, Assam under North Eastern Council, Ministry of DoNER, Government of India.