The NSCN-(I-M) in a statement said: 'Ironically, after five years, while the Framework Agreement has been put in cold storage, something unthinkable emanating from the Raj Bhawan in Kohima has taken over the scene'. 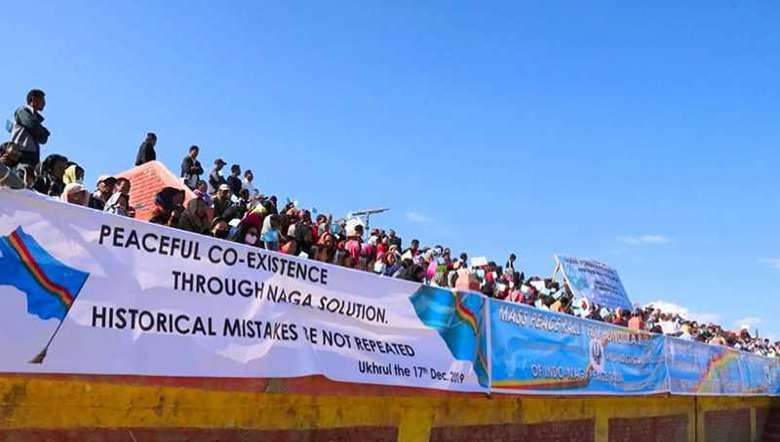 The Framework Agreement signed between the Government of India and the NSCN-IM completes five years on August 3, 2020. However, uncertainty prevails. To coincide with the 5th anniversary of the signing of the Framework Agreement, the NSCN-IM issued a lengthy statement on Sunday saying that “what has been mutually agreed upon should be honored in letter and spirit and that is the only way forward”.

However, the NSCN-IM expressed unhappiness over how the Government of India’s Interlocutor on Naga peace talks, RN Ravi operates things.

RN Ravi is also the Governor of Nagaland.

The NSCN-IM statement said that RN Ravi was given the honour to sign the Framework Agreement on behalf of the Government of India. “Ironically, after five years, while the Framework Agreement has been put in cold storage, something unthinkable emanating from the Raj Bhawan in Kohima has taken over the scene”, the NSCN-IM statement added. The NSCN-IM also said that the “ulterior motive” behind such a move has forced the Nagas to point fingers at RN Ravi.

“As seen in the verbal tone of RN Ravi, he has upped the ante against the Naga political groups as he brazenly used slanderous terminology like ‘armed gangs’ ‘underground groups’. But what has directly pricked the consciousness of the Naga people at large is when Ravi went for the profiling”, the NSCN-IM stated.

The NSCN-IM also alleged that RN Ravi had made the Nagaland state government to issue Office Memorandum on July 7, 2020 to all the Administrative Heads of Departments seeking information from employees about their relations with the Naga underground groups. “But we put on record that there are no Naga families who are not connected with the Naga political groups in one way or the other,” it added.

According to the NSCN-IM, what has driven the Naga people far away from Ravi is his “deceptive” manner of handling the Framework Agreement as he “deceitfully went beyond the call of interlocutor to indulge himself in playing divisive game among the Nagas to dismantle the very foundation of Framework Agreement”. The NSCN-IM further said that this has, therefore, created a huge trust deficit on the Government of India. It added that the way forward with regard to the fate of Framework Agreement is now faced with deep ambivalence. “But Government of India must undo the environment of mistrust being built over the time because it should not take recourse to unethical means to circumvent any conceived obstacles. What has been mutually agreed upon should be honored in letter and spirit and that is the only way forward,” the NSCN-IM further added.

On how they came to sign the Framework Agreement, the NSCN-IM said that  it was on August 3 in 2015 when the “historic Framework Agreement was signed under the dynamic leadership of the Indian Prime Minister Mr. Narendra Modi”. The NSCN-IM further said that it was signed with much hype and anticipation in the political circle. “There was much excitement and jubilation as Prime Minister Modi called up all the political leaders who matters that he has solved the longest political issue of Southeast Asia. But five years down the line the scourge of manipulation, misinterpretation and insincerity has kept the pot boiling,” the NSCN-IM alleged.

“When NSCN took over the banner in 1980, the struggle was taken to a greater height both in military strength and international campaign,” the statement said, adding, “Finally, Indian Army generals admitted the futility of attempting to subdue the Naga political struggle by military means”. This prompted the Government of India to take the move for political talks with NSCN, said the statement. So, after more than 30 years the Government of India under the then Prime Minister PV Narasimha Rao picked up the thread as he established contact with NSCN-IM leaders abroad. “He met NSCN leaders in Paris (France) with the words ‘We invited you for political talks because people are with you. The issue is with you and you have proved yourselves’”, the NSCN-IM statement added.

NSCN-IM, however, took the stand that it would enter into political negotiation with the Government of India only after the latter recognized the Naga issue as political and not as India’s ‘internal law and order issue’, the NSCM-IM also said.

The NSCN-IM then said that the second-Indo-Naga Ceasefire was thus declared on August 1, 1997and it was agreed that the political dialogue shall be at the highest level, i.e. Prime Minister level, without pre-condition and outside India in a third country.

The NSCN-IM then said that the turning point of Indo-Naga political talks came in 2002 when the Joint Communique of Amsterdam, July 11, 2002 was signed to give Government of India’s official recognition to the unique history and situation of the Nagas. “Henceforth, the Indo-Naga political talks found a strong foothold as talks were deeply planted from the realistic point of view,” it added.

According to the NSCN-IM, a time came when the Government of India invited NSCN-IM leadership Chairman Isak Chishi Swu and General Secretary and Chief Naga Negotiator  Th. Muivah to come to Delhi to facilitate more frequency of interactions. So in December 2002 they came to New Delhi, it added.

The NSCN-IM then said that it was in the year 2010 during the interlocutorship of RS Pandey when the Indo-Naga political negotiations gained new momentum. It also said that, to push forward for an honorable political settlement, the Government of India submitted its first comprehensive official response to the NSCN-IM in New Delhi. The proposal was made that political dialogue should move forward on the principle of “Shared Sovereignty”, the NSCN-IM further said.

The NSCN-IM then said that after undergoing several rounds of talks it gave birth to the signing of the “much hyped” Framework Agreement on August 3, 2015 at the official residence of the Prime Minister Narendra Modi. “It was a defining moment as it was arranged as a high profile political program where all the dignitaries who matter from both sides were present. The world was made to witness as it was live telecast on different TV channels,” the statement further said.

According to the NSCN-IM, the concluding remark of the Framework Agreement said, “It is a matter of great satisfaction that dialogue between the Government of India and the NSCN has successfully concluded and we are confident it will provide for an enduring new relationship of peaceful co-existence of the two entities. The two sides agreed that within this Framework Agreement details and execution plan will be worked out and implemented shortly”.