Havildar (GD) Pranay Kalita, Rifleman (GD) Methna Konyak and Rifleman (GD) Ratan Salam of the Assam Rifles laid down their lives in the line of duty on July 29 in Manipur 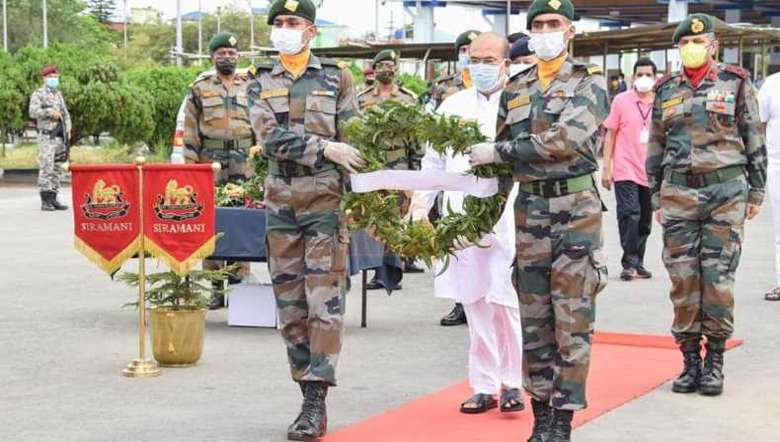 A wreath-laying ceremony was held at Bir Tikendrajit International Airport to honour the three martyrs on July 31, 2020

A wreath-laying ceremony with full military honours was held at the Bir Tikendrajit International Airport, Imphal under the aegis of HQ IGAR (South) on Friday, to honour the supreme sacrifice made by Havildar (GD) Pranay Kalita, Rifleman (GD) Methna Konyak and Rifleman (GD) Ratan Salam of the Assam Rifles, who laid down their lives in the line of duty on July 29 in Manipur, stated a release issued by IGAR (South).

The sacrifice of the fallen soldiers hailing from Manipur, Nagaland and Assam, truly represents the idea of unity in diversity - the strength of our nation and the Assam Rifles, it stated. Assam Rifles remains committed to the security of the nation and will continue to uphold its ideals in its pursuit to defeat secessionist forces, it added.

Further it stated, the nation salutes their supreme sacrifice made in the highest traditions of the Force in service of the nation. In this hour of grief, the Assam Rifles stands firm in its solemn commitment to ensure the welfare of the families of the fallen soldiers, it added.