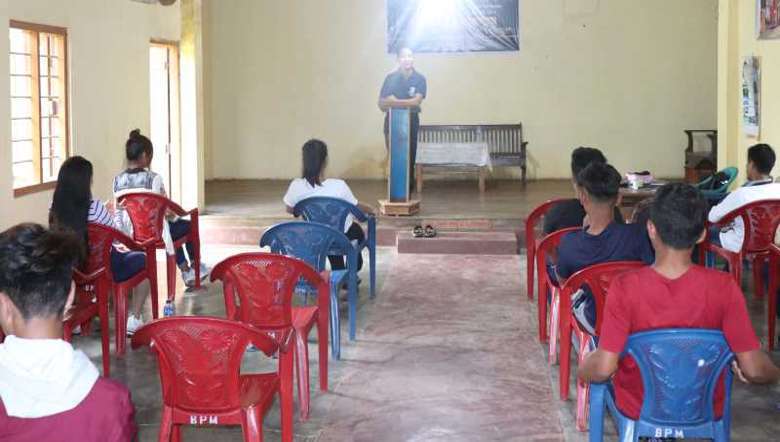 When felicitation of meritorious students only are heard and seen, few intellectual youth of Saitu Gamphazol area in Kangpokpi district who group themselves in the name of With Love organised a special programme for failed students of the area where they motivated them with career guidance and counseling apart from organizing a blessing prayer for them.

Lalcha Haokip, member of With Love, said that every year when examinations results of HSLC and HSE in common are declared from parents to student’s organizations, including various other organizations and NGOs praised and felicitated those successful students while almost none considered worthwhile to inspire the failed students.

He continued that praising and felicitating the successful students is natural and common thing but the culture of ignoring the unsuccessful students has now taken shape in a very destructive ways in the society as most of such students have started to gain destructive mindset of considering himself/herself useless in the family and society as well which could eventually lead them to many unwanted future.

He also pointed out that the pain and suffer of the failed students are hardly acknowledge even by the parents, responsible social leaders and friends which give them more weight in their ordeal of being unsuccessful and that make them unable to envisage their future career.

Considering the ugly turn of such culture we have decided to embarked on motivating and felicitating the failed students as well and used that platform to provide them career guidance and counseling so that they cannot only overcome the pain and suffering they endured during their unsuccessful period but also aware of their future career, he added.

While motivating spiritually the failed students, Pastor Khuptinlal Hangshing said that disheartening when failure to success in a competition is of human nature but if you let that demolish your career it will be your fault and it is not the will of God as well.

“Your sincerity and fairness in your examination is more important to God than your success with unfair means even if not for the people,” exclaimed the Pastor while motivating the students to glued with the fairness of God and commit themselves and their work to God while exerting efforts to achieve it.

Letginlen Doungel, research scholar of Delhi University enlightened the students with various other optional career apart from academic and motivate them with a popular proverbial, “failure is the stepping stone to success”.

He also inspired the students that failure is needed to makes you understand your mistakes, helps you create value and makes you resilient and fearless that ultimately will make you grow in success.

A blessing prayer marked the occasion.