Their cease work strike was launched by the All Manipur VDF Welfare Association, the apex body of the VDF personnel of the state since July 16 with an ultimatum till July 30. 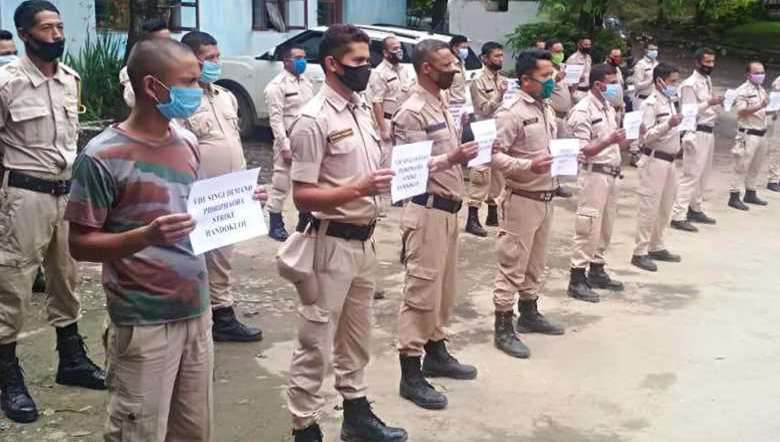 Their cease work strike was launched by the All Manipur VDF Welfare Association, the apex body of the VDF personnel of the state since July 16 with an ultimatum till July 30.

The sit-in protest organised by the Kangpokpi District VDF Welfare Association on Tuesday at Kangpokpi district headquarters was participated by all the VDF personnel of the district holding placards.

Speaking to the media on the sidelines of the protest, president, KDVDFWA Lamminlun Kipgen, said that despite their strike since July 16, the state Government and authority concerned still remained as mute spectators towards their genuine demands compelled them to hold protest in the form of a sit in.

“We have earlier submitted a memorandum to the chief minister under the aegis of our apex body, All Manipur VDF Welfare Association, highlighting our plights and demands for consideration within July 30. Kangpokpi District VDF Welfare Association had also sought support and cooperation of all civil bodies of Kangpokpi district in the ongoing stir in connection with our genuine demands,” he said.

Lamminlun Kipgen further said that their genuine demands that have been made for 11 long years about their rights, honorarium (updated salary), service security, 13 months’ pay and regularisation of service are yet to be addressed. They are also excluded from reimbursement facilities, death benefits and pension schemes despite their long sacrifice in safeguarding the law and order of the state, he added.

Lamminlun added that if the government failed to give positive responses within July 30, there would be more intense form of agitations, for which they sincerely appeal to all the civil voluntary organisations and like-minded people to support them and render maximum cooperation towards their genuine demands.