Will Manipur government fulfill demands of VDF men on strike? 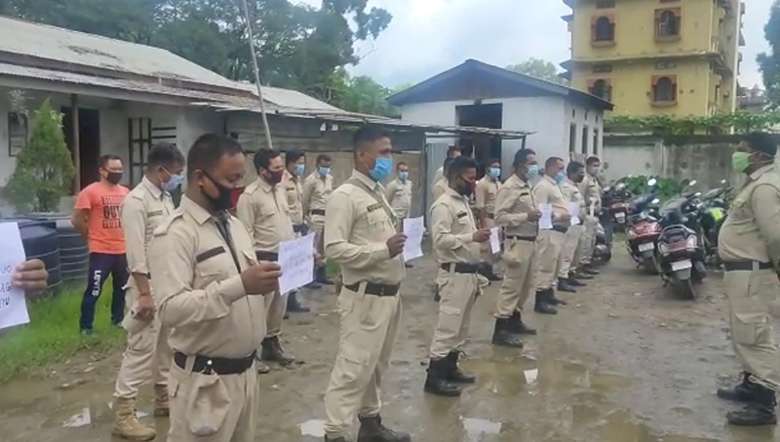 The Village Defense Force (VDF) under the Manipur Police department has been staging an ‘arms down-pen down’ strike amid intensified lockdown imposed in the state with the demand for job security. The personnel of the 12-year-old unit claim that the state government’s failure to respond to their demands has affected over 10,000 families. But their ongoing strike during this crisis time may also affect thousands of other families. In view of it, will the government respond to their demands?

“I can understand the present situation of the VDF personnel and demands that they have been making. If the demands of VDF personnel are legitimate then the government will fulfill their demands,” Imphal West Superintendent of Police K Meghachandra said, speaking exclusively to the Imphal free Press.

Citing the government’s failure to fulfill their demand before the given dateline, the All Manipur VDF Welfare Association had launched the indefinite strike on July 16. Their demands included regularization of jobs, setting up of a separate VDF battalion and monthly remuneration not less than 75 per cent from the monthly remuneration of constable 2009 batch.

The memorandum pointed out that the VDF personnel who were recruited to protect villages from militant attacks are now engaged in full time duty at various departments such as railway station at Jiribam, newly constructed railway tracts, Manipur central jail of Sajiwa, most of the banks of Manipur, government offices, MLA quarters, various police stations and outposts. They are deputed on similar duty as state police though with minimum monthly remuneration, the association stated. They have also been engaged in maintaining law and order and in gathering intelligence.

Speaking to Imphal Free Press over the phone, vice president of VDF, Imphal West block, Antim Tongbram said VDF personnel are doing the same duty as that of state police personnel. He said the personnel were recruited to defend villages from militant attacks but the government started deploying them at various departments. When the VDF personnel were first recruited they were engaged with only 303 rifles. But as the personnel started to be stationed at various departments, they have been holding various sophisticated arms and ammunitions after getting basic knowledge of firearms, safety, handling and others. Hence, under strict discipline, the government also needs to consider grant of Arms allowance, he added.

Tongbram said that as most of the VDF personnel are from poor families maintaining their families with minimum monthly remuneration is very hard. To meet the requirements, some of the personnel have quit their jobs and started engaging in daily wages labours, he added.

Meanwhile, one of the VDF personnel posted at a community quarantine center of Imphal West, in an interaction with the Imphal Free Press, said that even without health security the personnel are performing their duty at quarantine centers.

“I have been doing duty at a quarantine center without being provided proper personal protective equipment (PPE). If I am infected with coronavirus who will give health allowance. Although the government assured to give health allowance if VDF personnel is infected, why the government cannot give in written assurance. To meet the requirement of my family I am doing the job,” the personnel said.

Currently, of the over 2,000 persons found positive for COVID-19, eight VDF personnel have been affected. In a complaint made by the association to the government, the association lamented that the COVID-19 protection facility provided to the state police department and the ex-gratia of Rs 50 lakh does not cover the VDF.

The VDF personnel stationed at various departments have ceased their works in view of the ongoing strike. Now, it is for the government to step up in the interest of not only the VDF but also that of the state.

The history of Village Defence Force

It may be recalled that in 2008, on the fourth day of Holi festival, some proscribed underground men opened fire at a Thabal Chongba (traditional dance performed in the night time during Holi festival). The incident left five youths killed and one teenage girl injured that made her permanently blind. Following the incident, to protect themselves against such militant attacks and threats, the villagers at Heirok demanded supply of arms from the government by opening the Special Police Officers (SPOs). This was later named the Village Defence Force (VDF).

After considering the situation, the then government decided to open an SPO at Heirok The VDF personnel was first recruited in 2009 to guard villages from militant attacks in four valley districts Imphal West, Imphal East, Thoubal and Bishnupur of Manipur. In the first recruitment of 1,550 posts, 3000 youths from Thoubal district; 1000 youths from Imphal West district and 800 from Bishnupur district turned up

At present, a total strength of 10,050 VDF personnel have been recruited in the state. As per the government record, a total of 9,611 VDF personnel are deployed at Bishnupur, Chandel, Churachandpur, Imphal East, Imphal West, Senapati, Tamenglong, Thoubal and Ukhrul districts.