"The imposition of curfew and lockdown as a measure to contain COVID-19 in the state is pointless if the state permits issuance of ILP to non-locals." 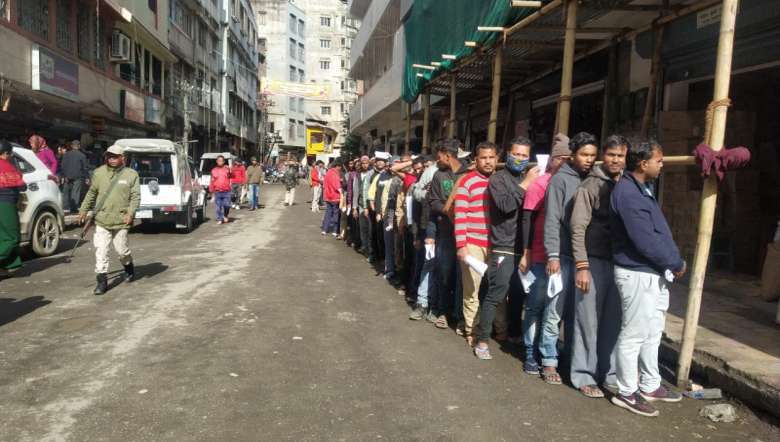 Various sections of the society in Manipur strongly opposed the state government’s decision on resumption of issuance of Inner Line Permit (ILP) amid the struggle to cope with the COVID-19 surge in the state.

The state government had announced the resumption of issuance of Inner Line Permit (ILP) from July 21. However, in view of the worrying COVID-19 situation, several civil organisations, including the Indigenous People’s Association Kangleipak (IPAK), the Yurembam Apunba Club and the United Development Club among others condemned the government’s decision.

A local club in Imphal valley, Yurembam Apunba Club, stated in a release that the condition of the prevailing COVID-19 pandemic has been worsening. It stated that COVID-19 began to spread rapidly and largely with the arrival of many returnees from various parts of the country and abroad. In this situation, the state government has started issuing ILP to non-locals, it added.

Pointing out that ILP passes have been issued to 30 non-locals during July 24- 25, the club stated that there is the possibility of non-locals entering the state illegally.

The imposition of curfew and lockdown as a measure to contain COVID-19 in the state is pointless if the state permits issuance of ILP to non-locals. Hence it urged the government to stop the issuance of ILP passes immediately.

Appealing the authorities concerned not to allow entry of any workers of railway construction if they do not possess ILP or labour cards, the club stated that as the situation of COVID-19 is severely affecting the state, it will start conducting drives to check non-locals who do not possess the said cards, it added.

Meanwhile, the United Development Club of Sagolband Sadokpam Leikai Imphal on Sunday said that most of the states are taking up the initiative of sending back migrants. But on the contrary, the state government is trying to bring in non-locals.

The United Development Club said in a release that the people, who are being brought into the state for the sake of utilising them at construction works, may be coming from a red zone. As such, halting the issuance of ILP would be the best option, it added.

IPAK secretary general Leishangthem Romen Meitei also stated in a release that the ILP system was introduced to protect the indigenous populace of the state. However, it is unfortunate to learn that the state government is trying to use it as a tool to generate revenue by resuming ILP amidst the COVID-19 pandemic. It said that resuming the issuance of ILP in the state may result in the widespread of COVID-19 in the state, it added.

As local transmissions of COVID-19 started in Jiribam and Thoubal districts, commissioner of the Thoubal district has ordered closure of all the markets in the district. Even OPD of Regional Institute of Medical Sciences (RIMS) has been closed after a staff tested positive and there are reports that state police and central have also been tested positive, the IPAK release added.

State special secretary (Home) H Gyan Prakash Sharma on July 19 issued a notification directing all offices concerned to resume issuance of Inner Line Permit (ILP) from Tuesday in all designated offices/ police stations of the state, official sources said on Monday. The state government had suspended the issuance of ILP on March 18 as a measure to prevent the outbreak of COVID-19 from reaching the state.