Is the use of pesticide killing honeybees in Ukhrul forest?

The pesticides which have fallen on flowers and plants are collected along with the pollen and nectars by the bees... This could result in the slow death of the bees. 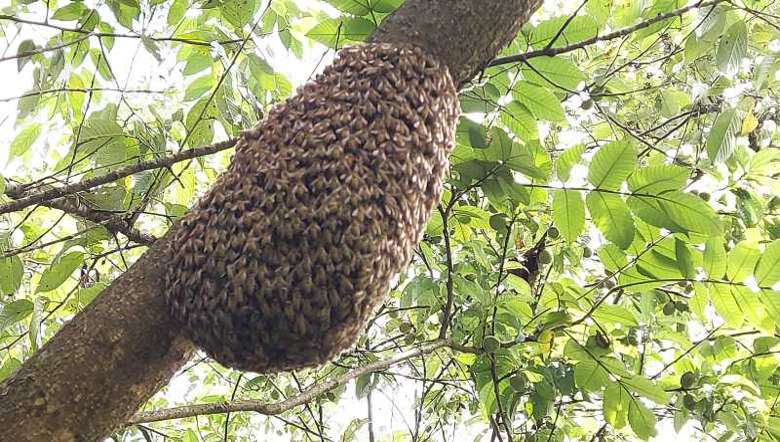 India is the second largest manufacturer of pesticides in Asia and ranks 12th globally. In Ukhrul district of Manipur, pesticides are used widely by farmers as a quick, easy, and inexpensive solution for controlling weeds.

Farmers in hilly terrain of Ukhrul use pesticides to kill weeds to increase the yield of crop cultivaton and boost the economy of the dictrict. However, most of the farmers are unaware that random and rampant use of pesticides can cause serious health implications to man and his environment. In August 2018, more than 28 buffaloes were found dead in the grazing area of Paorei village with ruptured lungs and perforated livers. Villagers suspected that it could have been caused by drinking contaminated water, citing one case out of many.

Pesticides can reach surface water from treated plants and soil. Owing to the rampant use of pesticides, there is a high possibility of widespread contamination of water, including groundwater due to pesticides used in Ukhrul district.

Although no study has been conducted, the increase and widespread use of pesticides by villagers and farmers might have contaminated almost every part of the pristine streams and rivulets of the hills.

In the earlier days, the people trekking or foraging in the forest drink water from the rivulets and streams without any hesitation. Now, due to excessive use of chemicals in the fields and farms, it is no longer safe for consumption to human beings and animals. Since, most of the farms are located in the upper region of the hills, the sprayed pesticides will surely runoff and trickle down to the lower region and pose a great health hazard to the people living in the lower region.

Another harmful impact is that pesticide sprays can directly hit non-target vegetation. Spraying the weed killer delays the flowering and reduces the number of flowers and consequently, the number of pollinators’ visits decrease. Bees are one of the most important pollinators but their numbers are decreasing. The bees need flowers for their survival. The nectar and pollen from the flowers are the main source of protein which protects them from freezing temperatures and parasites as well as for the queen bee to lay eggs. If the supply of pollen is less, the queen bee lays lesser eggs and thereby the population stagnates or declines. Large junk of pollens are collected from the wild vegetation.

Interacting with Imphal Free Pressover the phone, director of KVK Ukhrul, Rama Khrishna stated that loose spray of pesticides land on flowers and plants. The pesticides which have fallen on flowers and plants are collected along with the pollen and nectars by the bees, he said. This could result in the slow death of the bee colonies, he added.

A honeybee farmer from Ukhrul said that he has been observing a decrease in the production of honey year after year and the colonies of bees are slowly diminishing. This has affected his source of income and livelihood.

There is no doubt that climate change has impacted the colony of bees but excessive use of pesticide by the farmers in Ukhrul district has also adversely contributed to the decreasing numbers of bees, farmers say.

Generating awareness among the farmers about the adverse effect of pesticide on our environment and human health should be a priority. This can help in multiplying the number of honeybees. Farmers in Ukhrul district use pesticides mainly to increase food production and to reduce labour. But, they are used without scientific understanding and the impact that could be hazardous for biodiversity.

Also Read - Question of Justice - What happened to Chassad?