Question of Justice - What happened to Chassad?

A critical comment on Chassad burning, efforts in re-building, and the idea of Justice 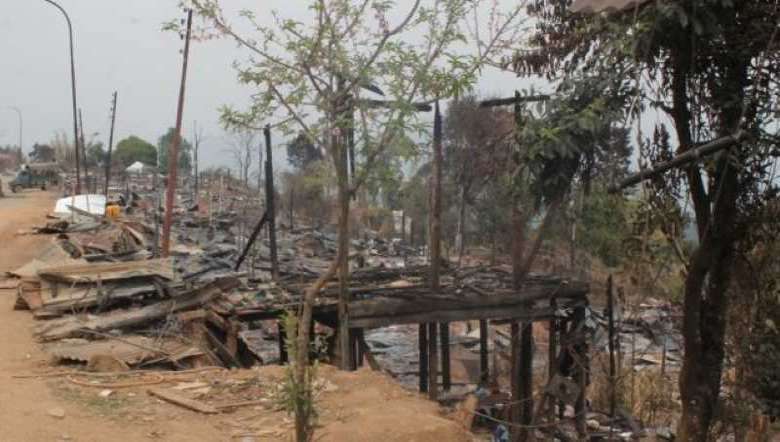 Amid the lockdown, the monsoon, and the political instability that has been on the show in Manipur, the rebuilding of Chassad, a village in Kamjong District of Manipur, has been on progress thanks to the government, various CSOs, and other concerned individuals and groups. Chassad has now about half of its houses rebuilt after the village was completely devastated roughly four months ago.

The entire village was burned and ransacked on March 16, 2020 by miscreants from their neighbouring village who were reportedly backed by armed rebels. Videos covering the incident were circulated and it went viral on social media in no time with people giving various comments on the video without anything they could do to lessen the tensions. In the videos, the miscreants can be seen armed with stones, firewood, catapult, knife and pointed spears; a large group of men screaming and shouting in mockery and anger as they pelted stones at the houses while some others were setting the houses on fire. In another video, the rebels can be seen in military camouflage with firearms joining the miscreants in burning the village.

The burnings reportedly started at around 08:00 hours, and by late afternoon, the whole village of almost 200 households was already reduced to ashes. The houses were levelled by the fire and everything that the villagers owned were turned into ashes including many two and four wheeler vehicles, and the lone educational institution, Lhingkim Memorial Academy was also not spared as can be seen from the photos and videos that circulated. It is also important to note that the 42nd Assam Rifles and the State Police Forces have stations in close proximity to the village.

The struggle of the people

That fateful day, the villagers of Chassad had faced unimaginable terror. The thought of helplessly watching their homes turning to ashes and at the same time having to run for their lives must have been mentally and emotionally devastating. On that day, most of the people of Chassad, excepting those who took shelter with the Assam Rifles, men and women and young and old were given no choice but to fare through the jungle in order to avoid any  uncertain dangers to their lives the miscreants may cause them.

Any effort therefore to bring out how much the people of Chassad had suffered on that day and after would still remain an understatement. In fact, though reliefs and aides have been constantly provided, the people are still faced with various hardships. They have been devoid of basic mental, emotional, and physical needs to which the flooding of temporary makeshifts tents and the difficulty in various others stands proof. There are even reports that suspect some people to be psychologically adversely affected by the sudden and unprecedented terror being inflicted upon them.

As aforementioned, construction of prefabricated houses has been ongoing for the Chassad villagers. Apart from it, the government has also provided financial assistance and necessary items as food, clothing, and tents. The CSOs too, on their part have been toiling hard towards re-building and offering humanitarian service to the villagers. Also praiseworthy is the public who has been generously donating reliefs in cash and kinds for the people of Chassad.

Furthermore, one may also note the overall concern of the like-minded and bright-minded individuals and groups, who had joined visionary hands for the society to raise voices for the people of Chassad, and for humanity and justice, irrespective of community origin. Efforts such as this are the bedrock of social harmony that can re-build the village and its people in re-shaping their mental and emotional state towards their social outlook. However, we are yet to strive harder to bring in more people into expanding our mentalities and broadening our mindsets beyond communal lines.

The idea of Justice

Unfortunately, though much has been done by everyone concerned, the idea of justice until so far sadly remains a far cry. In fact, the barbaric incident will remain entangled in the hearts of the villagers of Chassad and nothing can rightly do justice to it. It will remain as a nightmare, and will remain a day of sorrow and mourning for the people.

But what is baffling towards the striving for justice is the inaction towards the miscreants. Until today, the state and its administration hasn’t raised a single question about the culprits before the laws of the state. One therefore may wonder ‘what is the idea of justice’ of the government. Does the government believe that compensation and Justice are terms that are interchangeable or of the same nature? It is also to be remarked that the incident has greatly caused and questioned the government in its policy and ability. What then is the government’s answer towards such sensitive questions that can be detrimental to the overall governance policies?

Interestingly, in the photos and videos that circulated in social media, the culprits can be easily identified, and their inhuman acts of brutality and arson are plainly evident. The popular question is now why the government does not bring them into justice. Or one may go further and point the government of any lapse in the administration towards equal treatment before the law for all its citizens. But to a right thinking person, the law remains the same, irrespective of any virtue by community origin, birth, status, rank or any other kinds of relationships. In fact, justice must be for all and it must be known that it is a natural Human Right which must never be, in any way under any circumstances, compromised.

Subsequently, the government needs to be wise enough to understand that their actions and inactions in matters relating to granting Justice is of crucial significance as it will but remain a lesson to learn for the people. The government has every right to choose whether to stand with Justice and therefore grant justice or turn a blind-eye to the grave violations of law and order and the necessity and urgency to granting justice by bringing the culprits before the law. The government must know that this choice will automatically determine the kind of image that the government wants to build and the subsequent excellence or mediocrity in governance.

Albeit the efforts taken up by the government and the commendable role of the CSOs and individuals; the people of Chassad are yet to wake up to Justice. The honour and integrity as human beings and as citizens of the state are yet to be restored. In fact, until the culprits are booked and brought under the law, one can never say that Justice has been served to the people of Chassad in particular and to humanity as a whole.

As a result, just as Helen Keller, a political activist, had stated “Until the great mass of people shall be filled with the sense of responsibility for each other’s welfare, social justice can never be attained”, we therefore, as responsible citizens, and as like-minded, and bright-minded individuals, and as visionaries for peace and harmony of our land, have to come together and raise our voices for the people of Chassad, for our aspirations of societal harmony, and most of all for Humanity, so that Justice be granted its rightful place and honour.

It is an earnest plea therefore, that we must come together, regardless of our community origin, and stand together as we strive towards a shared vision and common goal of well-being and societal harmony for all.

(The views expressed in the piece are personal)