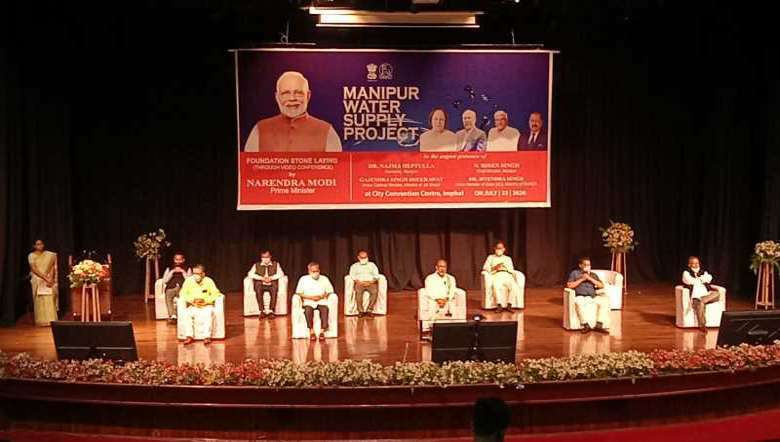 Addressing the video conference of the foundation stone laying of the project, PM Modi said the event is an example that even during the coronavirus pandemic the country has not stopped.

The Manipur Water Supply Project which is to be completed at a cost of Rs.3054.58 crore is expected to reduce water problems in the state.

Maintaining that ease of living is the right of everyone, PM Modi said that people will not only have access to clean drinking water at home but thousands will also get employment through the project.

"The project has been designed keeping in mind the needs of the next 20-22 years. With this project, millions of people will not only have access to clean drinking water, but thousands of people will also get employment," PM Modi said.

Modi reiterated the importance of the Northeast and said the region has the potential to become India's growth engine.

"Connectivity in the northeast is important, to achieve the goal for a safe and self-reliant India. Northeast India is the gateway to our ancient cultural relationships with East Asia," he said.

Strengthening Northeast strengthens our Act East Policy. Northeast is, in a way, the gateway to our ancient cultural relationship with East Asia and the future of trade, travel and tourism. That is why there is constant emphasis on connectivity related infrastructure in the entire Northeast, including Manipur, the Prime Minister said.

Thousands of crore have been invested to develop infrastructure in Northeastern states- 3,000 kms of roads have already been developed and work is ongoing on projects encompassing 60,000kms of roads. PM Modi said inland waterways are another sector on which massive work is being done in the Northeast.

In the future, connectivity will not just be limited to Siliguri Corridor. This will benefit business and farmers and save time, the Prime Minister added.

PM Modi further said that Manipur can become a big hub for sports in India. The Central government is providing the youth of Manipur and other Northeastern states with hostel facilities across India, he said.

"Clusters are being developed for value addition and marketing in local products as a part of the self-reliant India campaign. In such a situation, every help will be given to the organic products of Northeast to reach the markets of India and abroad," PM Modi said, adding that a bamboo industrial park has been approved to promote the bamboo industry in the Northeast.

"Hundreds of crores of rupees are being invested for farmers; artists associated with handicrafts and other facilities under National Bamboo Mission," he added.

The Manipur Water Supply Project is an effort of the state government to achieve the goal ofHar Ghar Jalby 2024.

The Jeevan Mission aims to provide 14,33,21,049 households with Freshwater Household Tap Connections (FHTC) through partnership of all stakeholders including inter-alia the state governments, Panchayati Raj Institutions and local communities.

The Government of India has provided funds under the mission to Manipur for FHTCS to cover 1,185 habitations with 1,42,749 households while the state government planned to cover the remaining households through additional sources of funding including funds from Department for Development of North Eastern Region.

An externally funded project, the Manipur Water Supply project was designed to provide FHTCS to remaining households in Greater Imphal Planning area, 25 Towns and for 1,731 rural habitations covering 2,80,756 households in 16 Districts of the state.