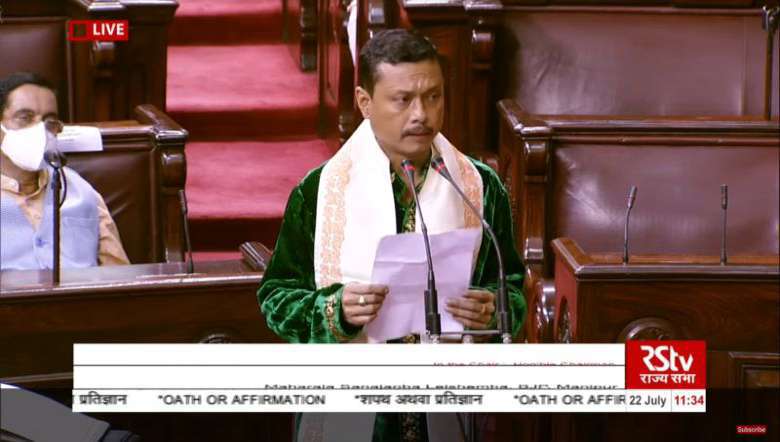 Manipur's titular King Leishamba Sanajaoba on Wednesday took oath as Member of Parliament at the Rajya Sabha. Dressed in a royal green traditional attire with a white scarf, Sanajaoba took the oath in Manipuri language.

In the oath taking ceremony, Sanajaoba promised to safeguard the Indian Constitution and the integrity of the country by taking the name of Lainingthou Sanamahi, Ebudhou Pakhangba and Shri Shri Govindaji. He also promised to perform his duties sincerely.

Sanajaoba won the lone Rajya Sabha seat of Manipur as a Bharatiya Janata Party candidate by securing 28 votes of the 52 votes cast on June 19. He filed his nomination paper for the Rajya Sabha poll on March 13 at Manipur Legislative Assembly secretariat, Imphal.

Several civil volunteer organisations in the state were against his move in contesting the Rajya Sabha election. They even demanded to withdraw his title as King of Manipur.

However, after winning the Rajya Sabha election, there has been no sign of any protest against Sanajaoba till date.