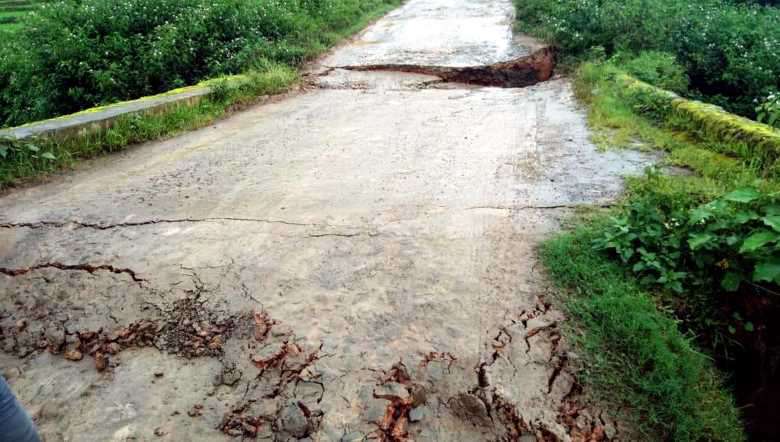 The monsoon fury that hit Twilang area along the Imphal-Tamenglong Road with landslide that completely cut off the area from the rest of the world has rendered thousands of people residing along the Saparmeina-Saikul road on National Highway 102 in Manipur in similar condition.

On July 10 at around 1:30 pm, the 15-year-old old RCC bridge along the Saparmeina-Saikul stretch on the national highway 102 passing through Kangpokpi district was badly damaged owing to heavy monsoon rainfall. The slab culvert of about five metre long is situated at Chainage 11.40 km from Saparmeina near Thangal Surung under Saikul Sub Division in Kangpokpi district.

According to Th Loken Singh, executive engineer, Sadar Hills Division, PWD Manipur, the RCC slab culvert is totally damaged as the abutment on both sides of the bridge has been damaged by the rain water on July 10 and the condition of the culvert is beyond repair.

Considering the danger of using the dilapidated road, the executive engineer had ordered closure of the road, putting a halt to traffic movement as a precautionary measure.

The Saparmeina-Saikul road is the only lifeline of the local people living in the area and the old RCC slab culvert serves as a bridge to the road leading to Kangpokpi district HQ for several villages in Konghom areas and Saikul Hill Town.

Thousands of people in over hundreds villages in Saikul areas, including Saikul Hill Town and Konghom areas have been facing tremendous hardships with the closure of the road.

Speaking on the sidelines of the tour, L Tongkhlolen Khongsai, president, ST Morcha Sadar Hills said that people residing in Konghom area along Saparmeina-Saikul solely depend on the road for transportation, connectivity, emergency services, etc and closure of the road as precautionary measure owing to the damaged RCC Slab Culvert caused tremendous hardships to the people.

He pointed out that a diversion was made before constructing the RCC slab culvert/bridge which can be easily restored as a temporary alternate connectivity by the concerned department considering the plight of the people and appealed the state government to look into the matter and initiate immediate action.

Meanwhile, the executive engineer in his report to the chief engineer, PWD Manipur stated that the road is to be diverted from Ekou to Langkhong via Ekouphai which connects Saparmeina-Ekou road on the southern side of Thangal Surung. However, the said diversion road is an untarred road connected by a small old wooden bridge of about 10 metre long which required immediate repairing to bear the traffic volume.

However, ST Morcha Sadar Hills president L Tongkholen Khongsai recommended that the earlier diversion over the same stream near the damaged RCC slab culvert be restored and constructed at the earliest which will be more convenient and easier to accomplish.

Despite the closure of the road, two wheelers were seen plying over the damaged RCC bridge on emergency. Many farmers, office goers and other commuters have been facing difficulties owing to the damaged connectivity.

To address their plight, the people in the area seek the state government’s attention in arranging at least an alternative connectivity at the earliest.