Biswajit put forth the plans for the improving the state power supply with the installation of 2 lakh prepaid metres. 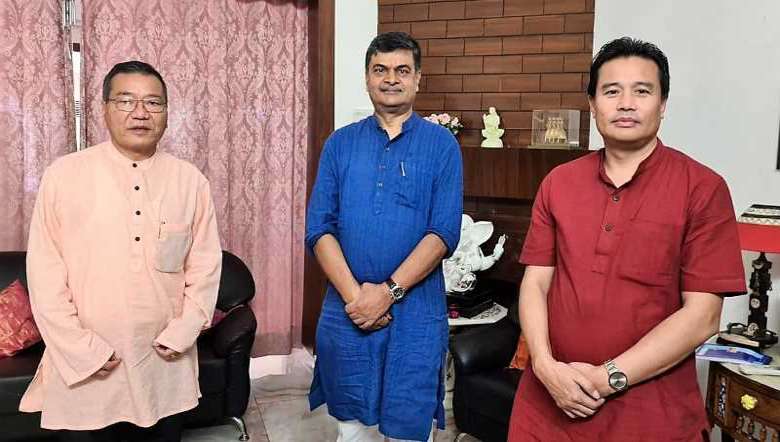 Manipur Power Minister Th Biswajit Singh on Sunday called on the Union Minister of State (Independent Charge), Ministry of Power Raj Kumar Singh to deliberate on several matters concerning the advancement of power system in the state and necessary actions for the improvement of state power supply.

During the meeting which was held around 11.30 am at the official residence of union minister of state, Biswajit put forth the plans for the improving the state power supply with the installation of 2 lakh prepaid metres and establishment of district headquarters with an estimate budget of Rs 10 crore.  He also laid the detailed plans for establishing Hydro Power Projects producing power supply of around 300 MW under a project of Rs 140 crore for improvement of power system in the state.

The union minister assured that the required funding will be provided shortly for successful establishment of the said plans.

The project for providing solar street lightings at district headquarters and erecting high mast lightings were also put forth in the meeting, he informed. The union minister further gave assurance to provide the required funding, he added.

The minister further expressed that there is an urgent requirement for system improvement to upgrade the power supply in Manipur. To meet the requirement, a project proposal of Rs 140 crore was sent to the Power Ministry, he informed. As per the instruction of the Ministry, the detailed information of the project has been uploaded on the National Portal, he added.

As these matters were discussed at the meeting, the union minister has stated that the project will be further deliberated at the ministry level on priority so that the required funding will be sanctioned shortly.  The union minister was also briefed about the establishment of additional Solar Power Project so that the state can follow the Renewable Energy Purchase Obligation (RPO).

The union minister praised Biswajit upon hearing that the state cabinet has given approval for establishment of solar power plants having the capacity of 100 MW and 50 MW.

The union minister was further briefed that efforts are being made to launch the projects by collaborating with Hydro Power Project NEEPCO to enable the state to produce power by its own.  The union minister has also assured that the ministry will also look for investors to help launch the power projects.

Minister Biswajit further expressed his confidence that the state will no longer be required to purchase electricity from outside if the projects are launched.