Tokay Gecko released in its natural habitat in Kakching forest 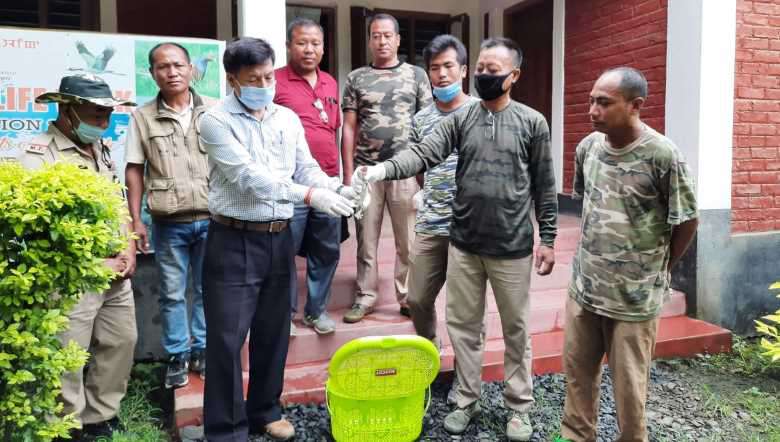 A rare young Tokay Gecko was rescued and released in its natural habitat at a reserved forest area in Manipur’s Kakching area on Saturday by the staff of Kakching Range Office.

Munal said that Chourjit found the reptile sitting outside his house which is built adjacent to the Sengmai River a few days ago. The sound of it every morning and evening for the past week frightened his children, he informed the Kakching Range Office.

Chourjit further told the staff that since the sound of the reptile can be heard from a far off distance, the outsiders may try to catch the poor animal. As per Chourjit, the staff of Kakching Range Office immediately rushed to his residence and rescued the animal on Saturday, Munal said.

Munal briefed that there is a wrong belief among the general public that such Tokay Geckos are useful in the treatment of many deadly diseases like HIV/ AIDS, Hepatitis. Because of such wrong notions, many black marketers are coming out and doing the lucrative business of trading the animal. It is very unfortunate and the belief is totally unscientific and there is no proof till now, Munal added.

Munal told that Tokay Gecko is a very gentle and handsome animal to look at. It is a rare reptile species which is listed in the Scheduled IV of India's Wildlife Protection Act, 1972.Any capturing or poaching of this animal is punishable by a jail term of three years or amount to paying a fine of Rs 25,000 or both.

Munal also appealed to the public to hand over any poor stranded animals like slow loris, tokay gecko, snakes etc., as Chourjit have done, whenever they are found entering in residential places, to a nearby forest office or give information to any forest officials instead of killing the poor animals.

Although there are plenty of laws to safeguard the forest animals, it is impossible to safeguard the priceless and prestigious wildlife animals without the help of local people, he said.  “We should join hands to save them for our upcoming generations. Let our Mother Earth be a safe dwelling place of innumerable wildlife, birds and animals,” Munal pleaded.