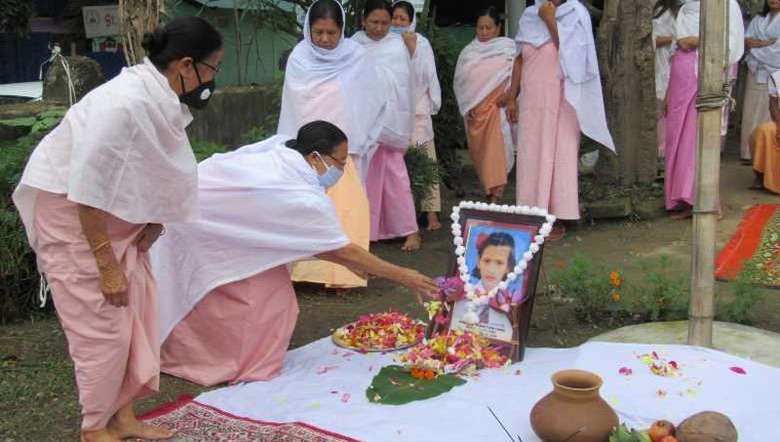 The first death anniversary of Ningthoujam Babysana was observed at Thangmeiband near the DM university western gate on Saturday.

Speaking on the sidelines of the event, convenor of JAC formed in connection with the death of Ningthoujam Babysana, Gyaneshori said that Babysana was allegedly murdered inside the school campus of Standard Robarth Higher secondary school. As she died under mysterious circumstances, the JAC has been demanding to find out the culprit for the last one year, she added.

To get justice to Babysana, various civil bodies, including others, had been demanding to book the culprits involved in the alleged murder, she added.

Although the case has been handed over to CBI, the case is still under process due to lockdown and the CBI officials have informed the JAC that investigations will resume after the lockdown, she added.

Placing their trust on the CBI, the family members of the deceased, JAC and the public are waiting for justice, she said.

She appealed to the people to light a candle on Sunday at their gates to show solidarity to the departed soul for justice.

Local MLA, Kh Joykisan who also came to join the observation told the media that some civil voluntary organizations are corrupted but they should remember that the voice of people is the most powerful.

The agitations carried out in demand for justice to Babysana were supported by the people of hills and valleys. This shows that there is some mystery behind her death.