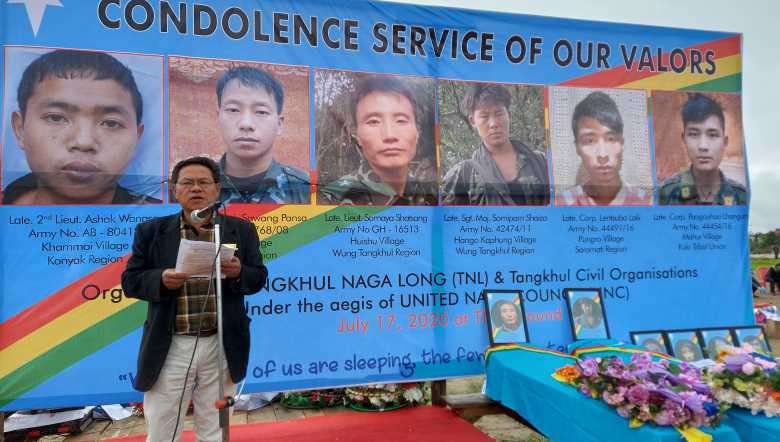 Condolence service for the six NSCN (I-M) cadres was held on Friday at TNL Ground, Ukhrul in a programme organised by TNL under the aegis of the United Naga Council (UNC).

Mortal remains of Somaya Shatsang of Huishu Village, Ukhrul district and Somipam Shaiza of Hango Kaphung village of Kamjong district were brought this morning. Home department of Manipur on July 14, gave transit/movement pass to vehicles and peoples bringing the bodies of the deceased cadres from Assam.

President of UNC, Kho John said, “On this fateful day, I on behalf of the United Naga Council and other apex organisations and tribes who are not here, extend heartfelt condolences to the bereaved family members and dear ones.”

The Naga people have been fighting for the past seventy years and the sacrifices of these six young men will not go in vain. It will go in the history of the Naga record and the Naga people, the living will remember them in Naga history, he said.

The UNC vehemently condemned the Assam Rifles for the brutalities committed against the six innocent Naga NSCN cadres at Arunachal on July 11, he stated adding it is a complete act of cowardice. Without any provocation, they have been massacring the Naga brethren for the past many years, he asserted.

“In this regard, we would like to appeal to the Prime Minister of India Narendra Modi, to prevail and stop such atrocities any further, and solve the Naga problem at the earliest. Meanwhile, I appeal to the Naga people to be patient and not get carried away by emotions as we are at the verge of the final negotiation of Naga political problem,” he stated.

President of the Joint Tribe Council Manipur Inpui, Liangmei, Rongmei and Zemi said, “I on the behalf of the Inpui, Liangmei, Rongmei and Zemi extend our salute to the two departed soldiers. Today, the departed souls have sown the seeds and sooner or later, we are going to reap the fruits of their sacrifice. May the spirit of the Naga national continue to soar higher and the spirit of comfort give solace to the bereaved family”.

Addressing the families of the six deceased cadres, president of TNL, Hopingson A Shimray said, “Giving one’s life for the nation is the highest act of patriotism. Your sons died defending freedom for the people he loved so dearly. We salute and regard them as a great soldier for the supreme sacrifice they have made for Nagas."

"We Tangkhuls as a community express our deepest sympathy to your entire family and share with you the grief and sorrow in this difficult time."

Despite the gloomy weather, hundreds of people came out to pay tributes to the martyrs. The mortal remains of Somaya Shatsang and Somipam Shaiza will be made to rest at their respective villages.