The worst portion of the road near Haipou Jadonang Park in Tamenglong town that was damaged by incessant rains in the region has been repaired. 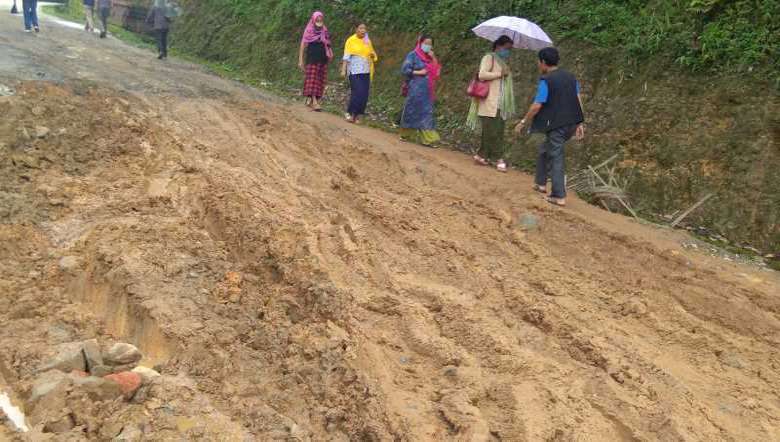 In a big relief to the people staying in Tamenglong district HQ, Manipur, a badly damaged road that cuts through the centre of the town has been repaired after the Imphal Free Press reported on the deplorable road conditions in the district headquarters on July 13.

Roadways in Tamenglong under deplorable conditions due to heavy rainfall

The worst portion of the road near Haipou Jadonang Park in Tamenglong town that was damaged by incessant rains in the region has been repaired by the contractor concerned.

However, rainwater filled slushy road at the Medical Gate area that runs through the town is yet to be repaired. Shivalaya private company, which is engaged in the construction of a double lane road from Tamenglong-Khongsang, is yet to carry out the repairing work.

Apart from the vehicular movement, daily commuters have to put up with many difficulties in passing though the deplorable road condition, braving the heavy rain. With the heavy downpour during the rainy season, potholes on the road have been filled with water and mud, causing tough times for the commuters to walk through it.

Meanwhile, the town ring roads which are under state public works department (PWD) have not been repaired yet. Now, the worst portions remain at Rani Gaidinliu Woman Market Tamenglong, border of Utopia Ward No I and Khoupilong Ward No V where the LPG godown is also located.

The town ring road, including the roadway from the old Treasury Road to deputy commissioner Office Tamenglong, and the market area to Immanuel Church road via the Forest Gate need to be repaired urgently. The roadway from Bazaar to foodgrain godown is also reportedly in a bad shape for quite a long time, posing hardship to the people residing around it to use the road.

The roads in the rough and hilly terrain of Tamenglong district are often damaged every year by heavy downpour during rainy season. The area receives heavy rainfall every year and it rains almost throughout the year except for a month two during the cold season.

The incessant rainfall often causes heavy landslides in the town area and along the highway, posing hardship and danger to the lives of the people living in the area. Residents are hit hard in the wake of the situation made worse this time as the double lane road that cuts and winds partly through the HQ area is under construction.