Manipuri documentary film ‘Highways of Life’, directed by Amar Maibam and produced by Films Division was among the eight films selected for the international competition section out of 1,780 films submitted from 112 countries for the festival. 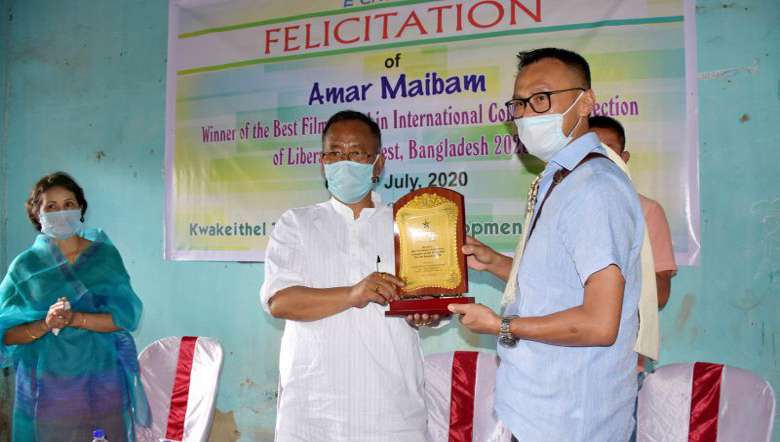 On receiving the best film award in the 8th Liberation DocFest Bangladesh, director of documentary film Highways of Life Amar Maibam was felicitated by Art and Culture Minister L Jayantakumar Singh at a function held at Kwakeithel, Imphal on Friday.

Jayantakumar said that achieving such an international level award in the film sector is a great and proud moment for the state. Receiving such an award would surely help in encouraging the youths of the state who are interested in trying their hands in the film industry, he said.

He further said that the award winner should consider this moment as stepping stone for bringing more laurels in the future. Dedication and commitment are the most essential elements in making achievements in any field, he stated. As such, the youth of the state should be highly sincere and dedicated while taking up any kind of task or work, he added.

Amar Maibam said that he felt honored not only in getting the award but for having the opportunity to reflect the lives of drivers and handymen who play an important role in transporting the essential requirements from other states.

Manipuri documentary film ‘Highways of Life’, directed by Amar Maibam and produced by Films Division was among the eight films selected for the international competition section out of 1,780 films submitted from 112 countries for the festival.

The minister wished the meritorious students for a bright future and encouraged them. He said that having two position holders of COHSEM examination is the pride for Keishamthong assembly constituency. The development of the state largely depends on human resources and thus, it is a prime duty for every individual to support and encourage the students.

As a part of the occasion, honorariums were also distributed to the agents of PDS items distributors of Keishamthong assembly constituency.