The All Manipur VDF Welfare Association had on July 7 submitted a memorandum to the chief minister. 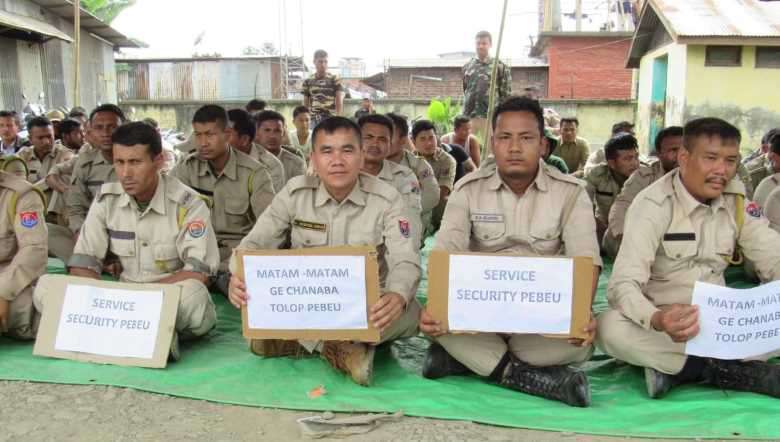 File photo of a sit-in-protest staged by Manipur VDF of similar demand
Manipur Village Defence Force (VDF) personnel, one of the frontline warriors fighting the pandemic, launched an ‘arms down-pen down’ cease-work strike on Thursday as the state government allegedly failed to respond to their charter of demands.

The All Manipur VDF Welfare Association had on July 7 submitted a memorandum to the chief minister and demanded to fulfill their demands by Wednesday, failing which the association will launch a casework strike.
The association said in a release that the decision to launch the strike was taken by the committee of the entire districts of the state on Wednesday.
A release issued from the association mentioned that VDF personnel have been playing a major role in maintaining law and order situation in Manipur for the last 12 years.
It also complained that about eight VDF personnel have been tested positive for COVID-19 but the government has failed to notice the issues faced by the VDF personnel who are one of the frontliners.
It is unfortunate that the COVID-19 protection facilities provided under the State Police department and the ex-gratia provision of Rs 50 lakh do not cover the VDF, it said.
Speaking to the Imphal Free Press, one VDF personnel posted in Imphal West district said though the personnel are posted in a similar fashion as the state police, the state has been neglecting in giving increment of monthly honorarium.
Amid COVID-19 issues, the price rates of most essential items and others have increased, he said. With the meager amount of monthly honorarium, the personnel are facing many challenges in running their livelihood.
Mentioned may be made that the state cabinet approved an increment of monthly salary of VDF to Rs 9,500 and ration money to Rs 2,000.
The charter of demands submitted to the government mentioned that the present rate of remuneration in respect of the VDF family is only Rs 7,500 with Rs 2,000 as ration money. It appealed to the government to consider a suitable increase in their monthly remuneration.
The personnel are also holding arms and ammunition after getting aware of basic knowledge of firearms, safety, handling and others, it said. Under strict discipline according to abide by law, so government should consider grant of Arms Allowance to the personnel, it added.
The memorandum also mentioned to consider for regularization of the VDF personnel as the personnel have been serving under strict discipline for the last 12 years, it said.
The VDF personnel have been performing the same duty like police/Manipur Rifles/ Indian Reserve Battalion for the entire day, it said. The government needs to consider grants for 13 months pay and washing allowance for not relaxing their duties of Sunday and general holidays in a year, it stated.
VDF is a security force that had organised its first recruitment rally in March 2009 in four valley districts Imphal East, Imphal West, Thoubal and Bishnupur to voluntarily defend villages from militant attacks. Initially, an honorarium of Rs 3,000, along with Rs 570 as ration money, was provided to the personnel each month.
Following a protest, the salary had been increased to Rs 5,000, including an allowance of Rs 1,000 in 2015. In April 2018, the salary was increased to Rs 6,000, including ration money of Rs 1,000. At present a total of 10,500 VDF personnel are deploying in the state.
First Published:July 17, 2020, 10:20 a.m.
Tags: