Villagers living under fear of landslide in Manipur

The villagers of Moulding village, near Leimakhong bazaar under Kangpokpi district fear that another rainfall in the state can possibly cause landslides which can destroy many houses in the village. 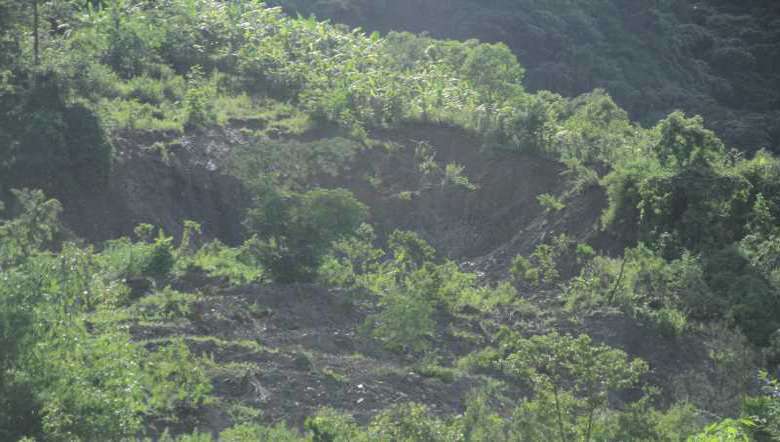 Villagers of Moulding village, near Leimakhong bazaar under Kangpokpi district in Manipur have been spending sleepless nights following a mudslide that occurred at the upper section of the village a week ago caused by heavy rainfall.

The villagers fear that another rainfall in the state can possibly cause landslides which can destroy many houses in the village. Residents of few houses situated close to the mudslide areas have been spending nights away from their homes due to the fear of landslide.

After the mudslide, a part of the river has been blocked, which further worried the villagers that the level of the stagnant water could rise and cause further landslide.

Speaking to the Imphal Free Press, chief of Moulding village, Kamsei Lenthang said that the villagers have been spending sleepless nights for about a week owing to the fear of another possible landslide in the event of more rainfall likely to hit the area.

Around 150 households in the area can be affected if at all a landslide occurs, the village chief said. He suggested that constructing a retaining wall at the top of the village at the earliest near the river may be an option to prevent landslides and mudslides.

He also said that the village has experienced mudslide twice in the past wherein the villages below the village were also affected even though there was no human casualty at that time.

While visiting the village, it was also observed that the bridge connecting the village and another village Molhoi was in an alarming situation. Major parts of the bridge foot were swept away by the river and the villagers have prohibited heavy vehicles from plying through the bridge.

The villagers also appealed to the authority concerned to construct and repair the bridge connecting the village.