Women in Manipur have a collective power to stand and fight for the truth and justice, HRA director Babloo Loitongbam said during the observance of Anti-Repression Day in Imphal. 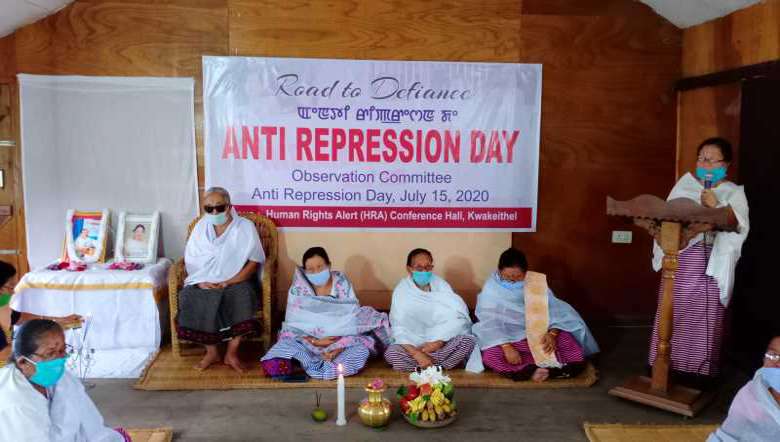 The defiant spirit of the Manipuri mothers needs to be passed down to the future generation, said Human Rights Alert (HRA) director Babloo Loitongbam during the observance of Anti-Repression Day in Imphal on Tuesday.

Asserting that women in Manipur have a collective power to stand and fight for the truth and justice, Babloo recalled the first Nupi Lal of 1904 and the second Nupi Lal of 1939 during which the brave women fought against the British against forced labour and artificial famine respectively.

The bold steps taken by the 12 mothers in front of the Kangla Fort on July 15, 2004, liberated the sacred Kangla fort from the Assam Rifles and the sacred place is now opened to the public, he said at the event held at Kwakeithel.

When Kangla Fort was liberated, former Chief Minister O Ibobi took the credit but everyone knows that the 12 mothers were the ‘real heroes’ who liberated Kangla from Assam Rifles, he remarked.

The mothers of the state have always taken the lead in the fight for the rights and justice, they are also bravely standing behind Extrajudicial Execution Victim Families Association Manipur (EEVFAM) in fighting for justice for the victims of extrajudicial killings, he added.

The director said that after the BT Road incident of July 23, 2009 where Rabina and Sanjit were killed by Manipur police, the Supreme Court has taken up the cases of the extrajudicial killings in the state and fortunately, incidents of fake encounter cases have come down to zero.

However, different forms of repression such as arbitrary arrest, atrocities, torture by the armed forces and state forces still continue, he added.

It is also very unfortunate that the armed forces of the Indian Union are not prosecuted as they are protected by the AFSPA, Babloo further added.

The Anti-Repression Day was observed to mark the ultimate historical and daring step taken by 12 ‘Ima’ (mothers) of the state, striping themselves naked and demanding the Assam Rifles personnel to rape them in the broad daylight in front of Kangla main gate on 15 July 2004.

The daring step was taken following the custodial rape and murder of maiden Thangjam Manorama in the most inhuman way by personnel of 17 Assam Rifles. Late Manorama was arrested on July 10 2004 and her lifeless corpse was found lying in the hill side with tell-tale signs of brutal sexualised torture.

Floral tributes were given to the portraits of the two deceased mothers who took part in the 15 July 2004 movement.