“Apart from gender activism I have taken up such initiative as no one knows when the pandemic COVID-19 will end. It is an initiative to live with coronavirus,” Santa Khurai said. 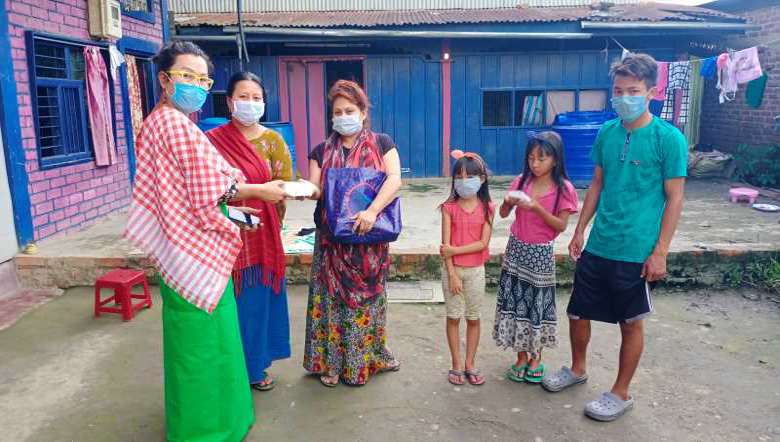 Santa donated smart phones to three mothers from Khurai Sajor Thoidingjam Leikai who used to borrow phone from her and others in the neighbourhood to enable online education for their kids. The mothers had to resort to borrowing phones as they were unable to afford smartphones which are needed for accessibility to online education.

The gender activist also donated teaching material, including a smart TV, a laptop, wi-fi connection to the library of Khurai Sajor Thoidingjam Leikai.

Speaking to Imphal Free Press, one of the mothers said, “Earlier I used to borrow phone from the neighbours for the purpose of my kid’s education. But now I am relieved from such an unusual act of embarrassment”.

Santa said she thought of making such donation when those three mothers started borrowing her notepad for the education for their kids. The purpose of donating smart TV is that the students can connect their parent’s phone and watch it on a bigger screen, she said.

The activist said that one Boicha Huidrom, who is currently working in Bangaluru in an alternative learning and distance learning, has volunteered to give free two days classes every week in a video calling app. So the students can utilize the smart TV.

“Apart from gender activism I have taken up such initiative as no one knows when the pandemic COVID-19 will end. It is an initiative to live with coronavirus,” Santa continued.

As she did not have enough money to make such donation she collected the donation money by means of crowd-funding, Santa added.

“I expected more funds would be collected from the crowd funding so that I could donate smartphones to families who cannot afford to buy for the purpose of their children's education, but the fund raised was half of what I expected,” she added.

Online classes though the big screen will benefit around 35 students residing in the surrounding area of the library. The local club of Khurai Sajor Thoidingjam Leikai lauded Santa for taking up such initiative for the students.