Manipur Chief Minister N Biren Singh said benefits are being provided to selected individuals who have the vision for establishing their own business but are not financially sound. 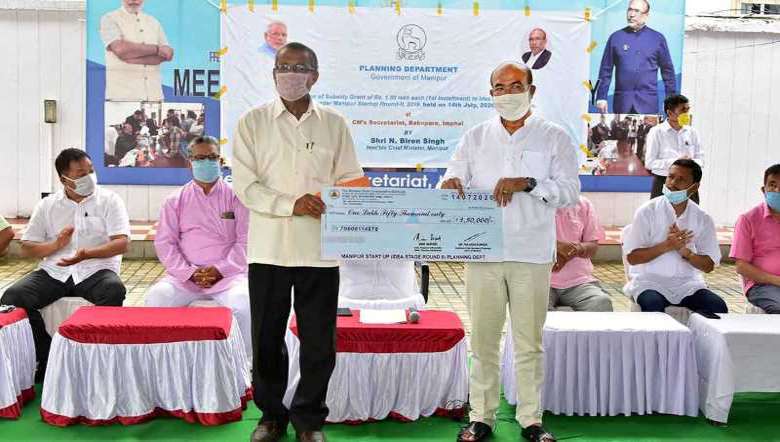 Chief Minister N Biren Singh has handed over the first instalment of startup subsidy grant of Rs 1.50 lakh each to 146 beneficiaries under idea stage of the Manipur Startup scheme round II at CM’s Secretariat, Babupara, Imphal. The function was organised by the Planning Department, government of Manipur.

Addressing the occasion, Biren said that the Manipur Startup scheme has benefited many educated unemployed people in the state. Benefits are being provided to selected individuals who have the vision for establishing their own business but are not financially sound. The selected people were provided training and only those who have successfully completed their training were given subsidy grant by the government.

The chief minister said it is important to inform the general public about few success story on startup scheme. HT industry Loktak began their activities with Rs 2.81 crore as rolling money annually. However, the firm could transact Rs 9.65 crore annually after getting loan/grant from the government. Similarly, Medilane Health Care’s annual sales transaction was Rs 4.17 crore per annum. The state hired ambulance from Medilane related to covid-19.

Under the startup scheme, different companies have so far provided direct employment to more than a thousand. Customer outreach which was earlier 70,000 has now reached 1.96 lakh. On revenue, which was previously Rs 7.41 crore now has been enhanced to Rs 24.60 crore, the chief minister informed.

The subsidy given to those beneficiaries will help in promoting the state’s economy to certain extent. The people of Manipur should have sense of responsibility only then a peaceful society can prevail in the state. Within a span of three years, law and order situation has improved considerably which has been possible with the cooperation and support of the people. For a good state, sincerity and transparency are necessary, he added.

Speaking on COVID-19, he said that united efforts from each section of society can overcome the pandemic. Govt. has increase testing capacity in RIMS and JNIMS, all the pending cases have been tested and there is no more overlapping in quarantine centres. New returnees will be tested as per SOP and they will get their results on time, he added.

The chief minister attributed the rapid growth of businesses in Manipur to Government’s aggressive push for business and entrepreneurship under the Start-up scheme.