All the Myanmar nationals were stranded in different parts of India and brought to Moreh town and seen off at the India-Myanmar Friendship Bridge by concerned Indian officials on duty. 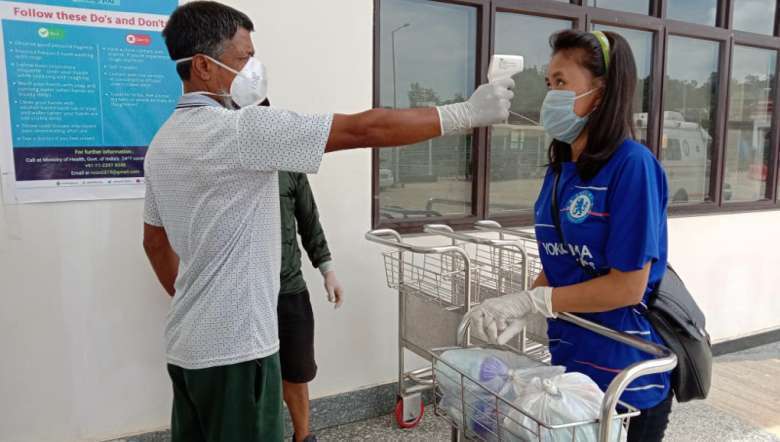 Amid the COVID-19 crisis situation, as many as 98 stranded Myanmar citizens have been repatriated to their home country from India’s border town Moreh in Manipur, as nine more Myanmar nationals were sent back on Monday.

All the Myanmar nationals were stranded in different parts of India and brought to Moreh town and seen off at the India-Myanmar Friendship Bridge by concerned Indian officials on duty. They were sent home after screening for COVID-19 symptoms by a medical team of the Moreh Hospital.

On Monday, nine Myanmar nationals, were sent back, official sources said, adding five are female and four are male, while two among them are minor. Six of them came from Dimapur in Nagaland while three, a women and her two daughters, came from Churachandpur, they said.

All the six persons, who came from Dimapur, are Theology students of Agape Bible College and Timothy Theological College and Seminary. Four of them are residents of Pyidawtha, Sagaing division Myanmar while the other two are from Tamu, Sagaing division and Myitkyina, Kachin state Myanmar.

The woman, who came from Churachandpur with her two daughters, is a resident of Satmozung Kaly Myo, Myanmar.

Dinesh Kumar, SDO Moreh, personnel of 43 Assam Rifles and staff of ICP and Immigration dropped the Myanmar nationals at the India-Myanmar friendship bridge.

The repatriation of Myanmar nationals first began in Manipur on June 23. At least 22 stranded Myanmar nationals were sent back to their home country on the day. Thirteen of them arrived in Moreh from different states of India while nine of them got stranded while visiting Moreh town. Some of them reached Moreh since June 8 from Kolkata and Guwahati among others and three of them arrived on June 23.

Nine others who were also stranded while visiting Moreh town were allowed to leave Moreh for Myanmar. All necessary procedure of immigrations was done at ICP Moreh before they proceeded to Myanmar.

On July 1, 19 Myanmar citizens were sent back to their home country from Moreh. They are theologian students studying at the Oriental Theological Seminary (OTS) Dimapur, Nagaland. Among them, one is from Pathein city Ngapudaw Township of Ayeyarwadi region, Irrawaddy division Myanmar, one from Za Loke Ma, Myanaung Township, Irrawaddy division while the eight others are from Kayin state of Myanmar.

Then on July 2, 42 more Myanmar nationals who were stranded in different parts of India were sent back to their home country from Moreh. As many as 35 of them came from Churachandpur district of Manipur while seven are from Dimapur.

Among the 35 from Churachandpur, three are from Mualveng, Hiangtam Lamka while the rest are from Ngathal and Kawnpui. Twenty-one of them are females and 14 are males.

Those Myanmar citizens coming from Dimapur included five males and two females. A medical team from Moreh Hospital led by Dr Houminlun Lhungdim conducted medical screening of all the 42 Myanmar nationals at the Integrated Check Post (ICP) Moreh before sending them off.

Six more Myanmar nationals were sent back on July 5.

Meanwhile, the Meetei Council Moreh (MCM) recently appealed to the state and central government to open the Indo-Myanmar border gates.

MCM president M Thoiba stated that due to the COVID-19 pandemic, the Indo-Myanmar border gates have been kept closed since March. The people of Moreh town have been facing immense hardships, he said.

Since the closure of the border, essential commodities could not be availed properly. Vegetables and essential items were brought from Manipur valley but they are sold at much higher prices, he said.

However, illegal items from Myanmar such as drugs, WY tablets, Win cigarettes and Godzilla (mosquito coils) are seized by security forces on a daily basis. There are unanswered questions on how these products reached Moreh town and imported through when the borders are shield, he stated.  Whether there are any drug factories set up at Moreh town is a question always asked by the people, he added.

The MCM further appealed to the government to open the border gates for particular hours on a daily basis.