The youth in Kangpokpi district of Manipur planted over 300 tree saplings at Leimakhong area on Sunday. 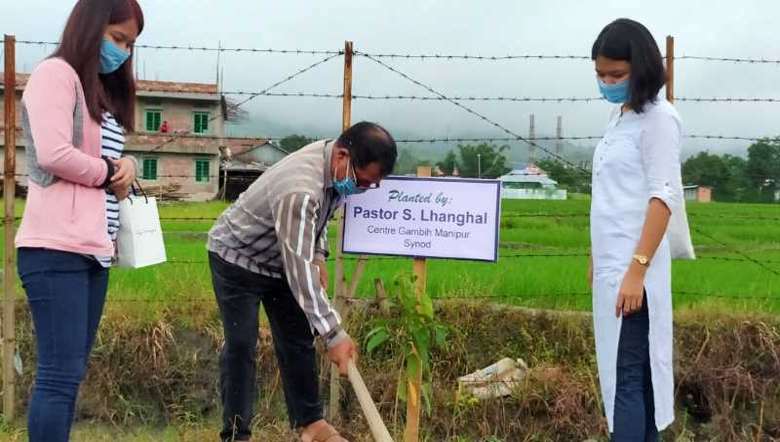 Pastor of a church leads a tree plantation drive in Kangpokpi

With the aim to spread awareness on environment the Christian way among the people in Kangpokpi district of Manipur, young boys and girls took out a tree plantation drive at Leimakhong area with the emphasis on the need to response to environmental crisis through godly ways.

Spreading awareness among the Christian-dominated society in the dstrict, the young boys and girls of a church society planted over 300 saplings at Leimakhong in Kangpokpi district on Sunday.

Explaining the symbolic nature and meaning on which basis the tree plantation was carried out, Paotinlen Chongloi, chairman, Centre Gambih KCK spoke on the significance of trees to the Christians as mentioned in the Bible. He said in total the Bible referred to trees over 525 times.

Chongloi also pointed out that in many ways, trees resemble Jesus as they give and keep giving. Trees give life and beauty, shade and rest, clean the air for people, hold back erosion and offer shelter, food and protection as Jesus do, he added.

Concern for the environment is one of the most commonly held values among the emerging generations while engagement in environmental concerns is a way to build bridges for the Gospel and to establish credibility with those who often assume the Church has nothing to offer, the chairman added.

"We are not promoting the Christianity religion by organizing the tree plantation programme rather it was solely a motivational approach to the Christian youths to embark on conserving and preserving while protecting the environment as many other youths in the society have already gone ahead in the mission considering the importance of reconciling the world, including the climate change," he added.

Chongloi further encouraged the Christian youths, saying people’s response to the environmental crisis needs to start with God and our response to Him in worship and service. “We need to protect and preserve our environment, create awareness and educate our younger generation helping them protect their life giving environment,” he said.

He also exhorted the Christian community to love people by caring for the environment in which they live as environmental concern is one aspect of loving our neighbors as ourselves, as much as caring about the water they drink, the food they eat, the shelter they enjoy and the physical ailments from which they suffer.

The chairman of Centre Gambih KCK further said that under the aegis of KCC Manipur Synod it plans to organize more programme on tree plantation in various places in the district under the Christian Church.