The Manipur Organic Mission Agency (MOMA), which started the export of organic pineapples in 2018, has set a total target quantity of 220 MT to be exported for the year 2020. This year's first shipment of locally grown queen pineapples was flagged off by CM Biren on Sunday. 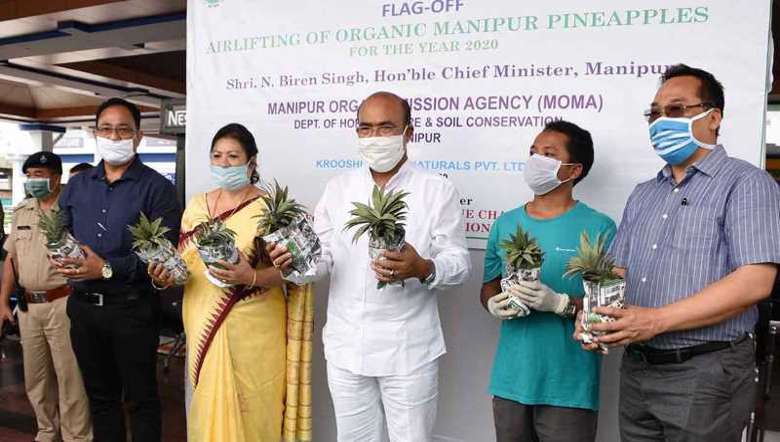 In the effort to meet the rise in demand for the state's organic pineapples, Manipur has started exporting locally grown queen pineapples to different cities through air cargo for the third consecutive year. Flagging off the first air shipment of 1.2 MT at the Bir Tikendrajit International Airport on Sunday, Chief Minister N Biren Singh assured pineapple growers in the state that the government would buy all their produces.

The Manipur Organic Mission Agency (MOMA), which started the export of organic pineapples in 2018, has set a total target quantity of 220 MT to be exported for the year 2020. MOMA functions comes under the department of Horticulture and Social Conservation, government of Manipur.

Owing to its juicy and unique taste, the demand for organic pineapples from Manipur from different parts of the country is growing.

In 2018 and 2019, the agency exported a total of 250 MT of organic pineapples to cities, including Delhi, Bangalore, Chandigarh and Mumbai. This year, MOMA has been able to improve the quantity of export despite the persistent inconveniences in the wake of the COVID-19 pandemic.

A total of around 220 MT of queen variety of pineapples are to be airlifted in different phases to cities like, Delhi, Mumbai, Ludhiana (Chandigarh), etc. with assistance from a local private company known as Krooshi-Karma Naturals Pvt. Ltd. These pineapples were grown and produced under the Phase-II of Mission Organic Value Chain Development for the North East Region (MOVCDNER).

Farmers need not worry for the market to sell their produces now, the chief minister, who also holds the Horticulture and Soil Conservation portfolio, said at the function. Assuring the farmers that the government would buy all their produces, the chief minister informed that a corpus fund of Rs 3 crore has been created for this purpose by the government.

Biren said that Manipur would become a self-sufficient and self-reliant state only when its agriculture and horticulture produces are increased by giving thrust to these sectors. Mentioning about Prime Minister Narendra Modi’s popular slogan, ‘Vocal for Local’, the chief minister said that the state needs to work hard to change and upgrade indigenous and local produces into the items of global standard.

This would serve as a lucrative means for generating income for farmers and people of the state, he said and added that the government would always extend all possible support and award incentives to hard working farmers.

Responding to a query regarding price hike, the chief minister asked the shopkeepers to sell all the items as per the prices fixed by the government. He said that the government would be compelled to take action against erring shopkeepers and traders if they continue to charge exorbitant price from the people at this time of hardship.

Under the Mission Organic Value Chain Development for North Eastern Region (MOVCDNER), the chief minister handed over one power tiller, one brush cutter and some other inputs to seven Farmers’ Producer Companies for the year 2019-20. He also distributed subsidized 40 power tillers and 20 tractors under Mission for Integrated Development of Horticulture (MIDH) 2019-20. He also handed out quality planting materials under these two missions to different farmers and FPCs at the function.

Addressing the gathering, the chief minister said the state has seen a fast improvement in organic farming in the past few years. He said that the Union Ministry of Agriculture and Farmers Welfare approved only 15,000 hectares of land for organic farming in the State under Phase-II of MOVCDNER.
However, considering the progress of this sector in the past couple of years, the Ministry had approved 25,000 hectares and 50 FPCs for growing ginger, turmeric, kiwi, passion-fruit, pineapple, king chilli, chakhao, HYV paddy and maize for the years 2020-21 to 2022-23 under the Phase-III of MOVCDNER, he informed.

The chief minister also urged the people to be sincere, hardworking and committed no matter in what profession they are. He said that no community in this world can match the people of the state in any field if they work hard with conviction and sincerity. Talent of Manipuri people, culture, arts, crafts and indigenous produces are well acknowledged by the people of other states and countries, he added.

Stating that it has been his belief that Manipur would prosper when horticulture plants are abundantly grown in the hills of the state, the chief minister exhorted the hill-people to grow plants like turmeric, ginger, pineapple, banana etc. instead of poppy plants. Lauding the Horticulture and Social Conservation Department for taking up many encouraging tasks in the past few years, he also assured that the present Government would never indulge in any form of nepotism in awarding promotion and rewards to any employee of the state government.