All the women except for one who is a mentally ill person are suspected to be victims of trafficking. 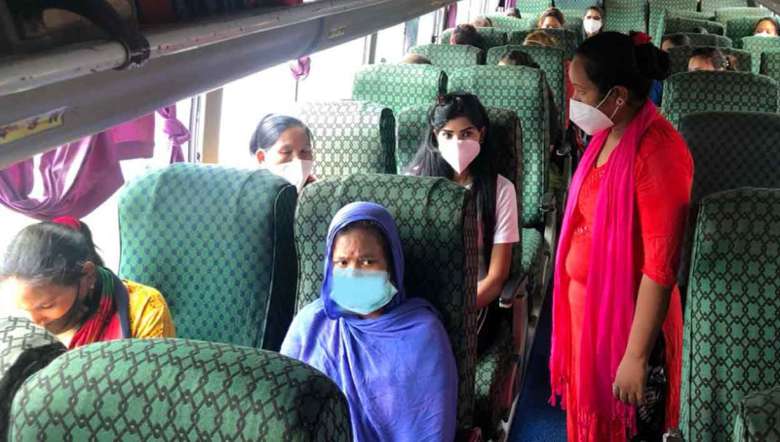 The Social Welfare Department has stated that a total of 21 Nepalese women left Imphal for their hometown in Nepal on Sunday in a bus along with security personnel and representatives of Nepalese Embassy. All the women except for one who is a mentally ill person are suspected to be victims of trafficking.

They have been handed over to counsellor, embassy of Nepal Prakash Adhikari by the state government authority after completing due procedures for repatriation back to their homes in Nepal, said a release.

They were all rescued in the month of November and December in 2019, it said. Most of them came to Manipur in small groups both by air and through land routes in four batches, it added.

Eight of them were detained by the Airport Authorities at Imphal International Airport on suspicion due to lack of proper documents while the remaining 12 were apprehended at the International border in Moreh by a team of Moreh police, 43 Assam Rifles and ICP officials, it said. They were all reportedly bound to travel to Gulf countries like Kuwait, Dubai etc., via Myanmar, it added.

All the 20 were provided shelter and other support services in three Ujjawala homes in Kakching and Chandel, run under the department of Social Welfare, government of Manipur, the release said. The department actively monitored their promotion of shelter and other support services like medical aid, counselling and vocational training during their stay in Manipur for the last eight months, it stated.

On December 7, 2019 one mentally ill Nepalese women who was found loitering at a paddy field at Choithar village in Ukhrul was rescued by the Ukhrul police and kept in Swadhar Home (UNICAM) in Ukhrul district, run under the department of Social Welfare, it said.

This is the second batch of Nepalese women who have been rescued and repatriated back to Nepal, the release said. Earlier, 179 Nepalse citizens including 32 men were rescued in Manipur and repatriated back to Nepal in the month of February, 2019. Such rescue of victims of trafficking in person, providing them shelter and support services and finally repatriating them to their respective hometown is possible only because of the collective efforts of the law enforcing agencies, NGOs, Home department, Ministry of External Affairs, Nepalese Embassy and Social Welfare department, it said.

All concerned are requested to remain alert so that precious lives can be saved from the clutches of Human traffickers. In case of women related issues and any suspicious activities relating to women trafficking, women Helpline-181 or the nearest police station should be informed immediately, it added.