A massive tree plantation drive was inaugurated at Heirok, Thoubal district by YBC Club, Heirok part - III in collaboration with NYK Thoubal on Saturday. The club members will be planting a total of over 400 saplings over the course of three-four days. 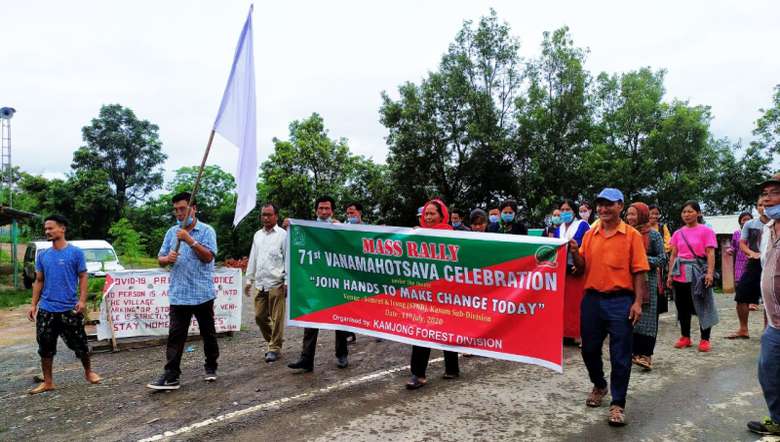 Several civil voluntary organisations of the state have been witnessing the ‘71st Van Mahotsav Celebration’. A massive tree plantation drive was inaugurated at Heirok, Thoubal district by YBC Club, Heirok part - III in collaboration with NYK Thoubal on Saturday. The club members will be planting a total of over 400 saplings over the course of three-four days, a club member said.

The executive members of Joint Co- Ordination Committee on Wildlife and Biodiversity also took part at the plantation event.

WBCC Yairipok Branch Secretary Thounaojam Sushil said that altogether, 95 per cent of the saplings which were planted earlier on World Environment Day last jointly by the Forest department, police department and many CVOs, local bodies along with WBBC members were seen growing. The WBBC is targeting to grow the saplings which are planted on Saturday at hundred per cent, he added.

He further stated that WBBC has been participating at various Wildlife and Biodiversity related events with a purpose to save the deteriorating ecological balance, and ready to join in the days to come, he said. “Let us preserve and save Wild life animals and the environment,” he appealed.

Meanwhile, as held across the nation during the First week of July every year, the divisional forest officer, Kasom Khullen under the supervision of divisional forest officer, Kamjong district organised a mass tree plantation programme at Somrei and Irong Villages which falls under Kasom Khullen sub division of the district. The event also witnessed the distribution of saplings to the villagers of both the villages.

The event which is being held under the theme ‘Join Hands to Make Change Today’ was followed by a public awareness rally to give the message of safeguarding forest and wildlife animals.

DFO Kamjong SW Suisa, MFS, stated that the Forest department is keeping a target of planting more than 85 thousand saplings including bamboo saplings within Kamjong district alone during the month of July as a mark of Van Mahotsav celebration.

For this, the distribution of saplings is being done in a war footing. A total of 32,000 saplings, including bamboo saplings were already distributed to the villagers of the areas which fall under Kasom range officer only excluding the saplings that were distributed on Saturday, he added.

The DFO also informed that if any CVOs, local organisations or any individuals of the district have the zeal for planting trees, then please feel free to come at the office and take the saplings at free of cost by submitting an application only.

The DFO also said that the district level Van Mahotsav celebration 2020 of Kamjong district was held on July 8. He also appealed to the public of the district to be a responsible citizen each in bringing a clean environment by planting more trees.

As a part of the event,villagers  led by DFO Suisa himself planted several saplings like bitter beans, Bot , Leihao ,Blackberry etc. at the complex of the Somrei Baptist Church.

Later, a public rally to enlighten the masses about the usefulness of tree plantation had been carried out. The rally which started from Somrei Village was being flagged off by DFO Suisa and ended at Stanba High School of Irong Village.

The plantation was also carried out at both the road side of the main road that leads to the school. Many saplings were also being distributed to the villagers.