Two men have been arrested by the Manipur Police, Imphal East district for attempting to steal money by vandailising an SBI ATM booth in Imphal East on Saturday, police sources said. 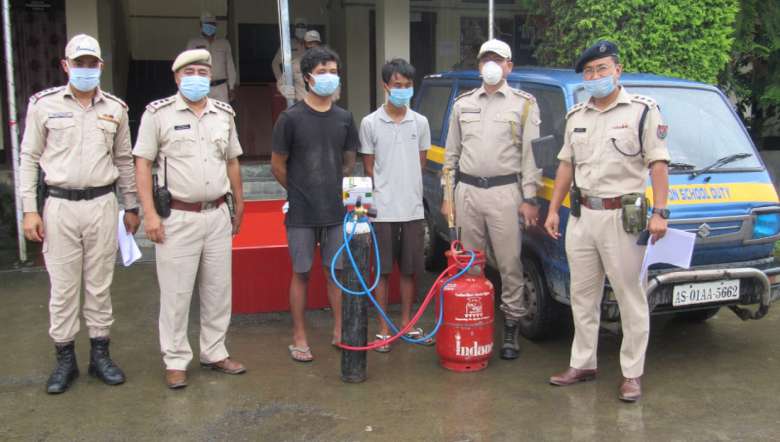 Two men have been arrested by the Manipur Police, Imphal East district for attempting to steal money by vandailising an SBI ATM booth in Imphal East on Saturday, police sources said.

Superintendent of police, Imphal East, Jogeshchandra Haobijam told reporters that following an alert, a team of district police rushed to the ATM booth located near Bheigo Saw Mill, Andro Parking, where the two boys tried to steal money at 6 am Saturday.

The SP said the team arrested the two miscreantes and one LPG cylinder, one oxygen cylinder and a cutting torch was found inside the said ATM booth.

The miscreants were identified as one Asem Rojit, 29, son of late A Norendro Singh of Palace Compound and Seram Bikram, 20, son of S Boson of Pukhao Naharup who is at present staying at Singjamei Mayengbam Leikai.

SP said Rojit was intercepted from the surrounding of Eastern Sporting ground near his house and Bikram was arrested from his Singjamei residence. The two miscreants have admitted to their crime, he added.

“It is unfortunate that Rojit is residing opposit the ATM booth and he was found to be the main culprit of the incident," Jogeshchandra said.

On police verification, the two men revealed that they attempted to commit the crime at about 12.50 am to 1.22 am Saturday. Due to frequent police patrolling during the night time they had to run away, leaving behind the equipment they used during the crime.

The general manager, SBI (RBO), who visited the spot, said that the ATM machine contained an amount of Rs 16,90,000, but no money was stolen from the ATM booth.

A case has been registered against the two at the Promompat Police station, Imphal East and the equipment they used in their mission along with a Maruti van bearing registration number AS01A/5662 have been seized. They will be produced at the court and appropriate legal actions will be taken up, the SP said.

Assistant manager of Fidelity National Information Service (FIS), Gautam Sharma who was also present at the press conference said that similar two incidents had occurred recently. One at Sagolband Tera Ingudam Leirak from an United Bank of India ATM booth on June 26 and another at Singjamei Mayengbam leikai from an SBI ATM booth on July 6. The recent two incidents were  minor as compared with the incident that happened on Saturday, he added.

Police said the van that was seized in committing the crime belongs to Rojit who runs a school van service of Heritage Convent. The two learned how to vandalise ATM from a youtube video, police added.