EEVFAM president Renu Takhellambam, briefing the media on the 11th Foundation Day of EEVFAM at HRA office, Kwakeithel, asserted that so far the CBI has registered 39 FIRs, out of which 14 charge sheets have been filed against 80 state police personnel. 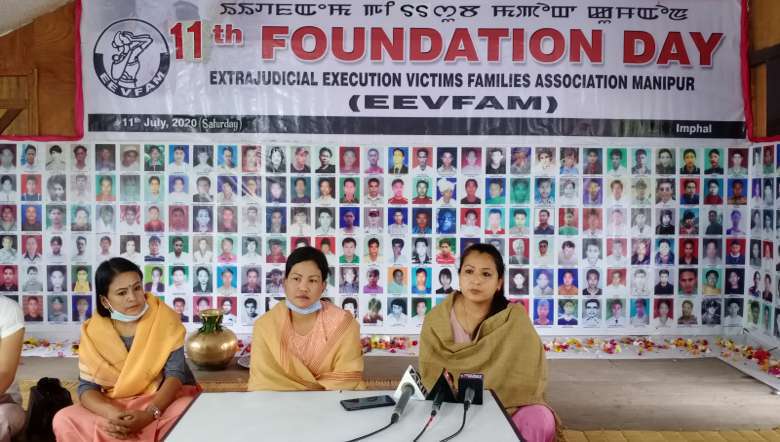 EEVFAM president Renu Takhellambam, briefing the media on the 11th Foundation Day of EEVFAM at HRA office, Kwakeithel, asserted that so far the CBI has registered 39 FIRs, out of which 14 charge sheets have been filed against 80 state police personnel.

Renu said it is indeed shocking that the government has not suspended those police personnel and no personnel of armed forces are charge sheeted despite evidence of their involvement in the cases.

Although the Supreme Court directed the CBI to complete the investigation of the 39 cases by December 2018, till today the CBI has not submitted charge sheets of 17 cases and has not completed further investigation of two cases, she added.

The president read out a charter of demands to the state and central government. The demands are as follows.

1. Promptly grant pending prosecution sanction of all police personnel indicted by the CBI without any delay.

2. Suspend all police personnel indicated by the CBI charge sheets. Allocate adequate budgetary funds and to expedite the process of compensation to the victim under section 357 A of Cr.P.C.

3. CBI should complete the investigation of all the pending cases at the earliest without any further delay. The ministry of Home Affairs and Defence should grant prosecution sanction of all the personnel of armed forces indicated by the CBI for criminal charges and suspend them.

4. Renu also appealed to the registry of the Supreme Court to ensure that the investigations of all the 1528 cases are initiated without any further delay and also urged the High Court and its subordinate courts to take up the trial of extrajudicial execution on top priority basis without any undue delay.

She further appealed the witnesses to cooperate with the investigation and to the general public to encourage the victims in the striving for justice.

“Justice delayed is justice denied. The undue delay in delivering justice will only make a mockery of the justice delivery system,” asserted Renu.

As a part of the observance, discussion was held on the theme ‘Justice Delayed is Justice Denied.’ Floral tributes were given to the photos of the 1528 victims by the family members of the victims and their supporters.