The only solution to acute shortage of drinking water is to plant more trees and protect the environment, the minister said during the celebration of 71st state level Van Mahotsav. 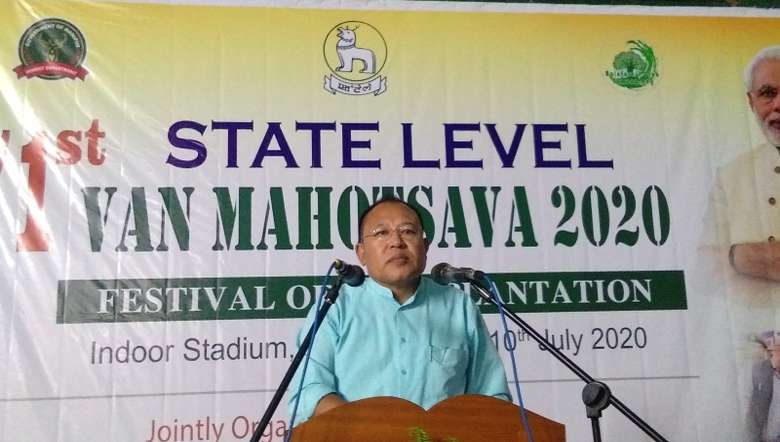 Forest, Environment and Climate Change Minister Awangbou Newmai has said that now is the right time to realise the importance of trees and forest.

Speaking as the chief guest during the celebration of 71st state level Van Mahotsav held at the indoor stadium Tamenglong on Friday, he said that the people of Tamenglong did not require ceiling fans or faced shortages of drinking water twenty years ago.

The only solution to acute shortage of drinking water is to plant more trees and protect the environment, the minister said. Van Mahotsav was started with an aim to plant trees and give awareness about the importance of trees, and forest and environment to the citizens, he noted.

“Twenty years ago, we hardly cared about water reservoirs or conservation but we are now facing water scarcity in every village today. Although we have water pipes and fittings equipment, we are not able to get water now. The only solution for this is to protect forests and plant more trees and not to cut them,” he added.

COVID-19 is one such disease which is very much related with climate and environment change and ecological imbalance and because of this, the people of the world are now facing such a deadly disease, he observed.

Under his ministry, two to three projects such as Hornbill conservation project, watershed project, honey bees project are being put up to the central government and it will be implemented very soon, he said. He expressed that support from the public, NGOs, and civil bodies are required so that once the project is passed, it can be implemented well in time.

He informed that a project called ‘Green Manipur’ has been started in Manipur under the leadership of the chief minister of Manipur.

He also mentioned that during the months of October, November and December, the people used to sell dried Amur Falcons meat but now it has been stopped. For this, he immensely thanked the people of Tamenglong.

“While we are protecting the environment, we are also protecting ourselves at the same time,” he said. He also appealed to the public of Tamenglong, especially the farmers, that they can do jhum cultivation for survival but they must also maintain and preserve forest areas so that the people and other living beings can survive in the future.

Chairman ADC Tamenglong Namsinrei Panmei urged the forest department to share power with ADC of Manipur to work out from the grassroots level.

Trees saplings were also planted in and around Indoor Stadium Tamenglong by dignitaries as part of the celebration programme.