The alarming amount of garbage floating in the river can be seen from the long stretch starting from Imphal to Bishnupur district. 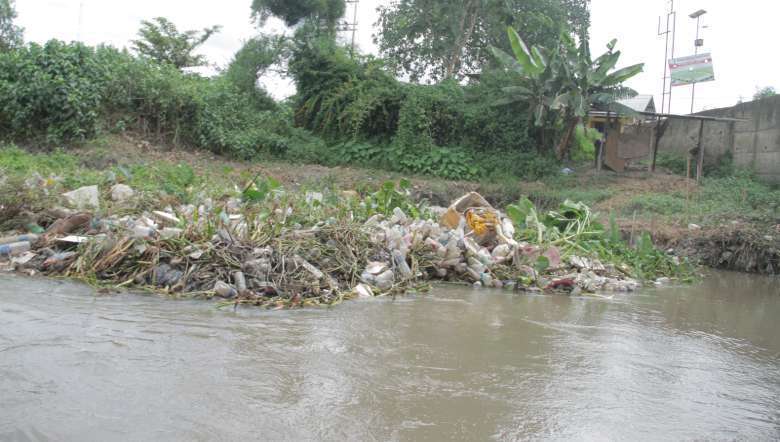 Dark and toxic flows the Nambul River that runs through the heart of Imphal, the capital of Manipur. Filled with stench and choked by the increasing heaps of plastic and other wastes, especially empty plastic bottles floating in it, the dying river has been posing health hazards to the people living nearby and a daunting challenge to the state in the efforts to revive it. The alarming amount of garbage floating in the river can be seen from the long stretch starting from Imphal to Bishenpur district.

A tributary of the Loktak Lake, Nambul River was once an important waterway to the state till the late 60s. People living in and around the Loktak Lake used to bring fishes through the river and sell them to residents in Imphal. But the condition of the river, the economic lifeline, deteriorated and its features changed over the years and came to be called “Nambul nalla” (drain) by some.

Experts attribute several factors for the sorrowful and dying state of the river, apart from the toxic wastes floating in it.

Deforestation at the source of the river in Kangchup hills range under Kangpokpi district is also one factor for the decrease in the water flow of the river. As such, the river could not dilute the drain water falling in it from many localities in Imphal areas, which is also another factor why the condition of the river is deteriorating.

In a bid to prevent pollution of rivers, the state government in March 2019 launched rejuvenation and conservation of Nambul river under the National River Conservation Plan (NRCP) of the Union Ministry of Environment, Forests and Climate Change.

When the project was launched, Manipur Chief Minister N Biren Singh said that the project was planned and conceptualised when he was the minister of environment and forest during the Congress government in 2004.

Deputy director, directorate of Environment and Climate Change, T Brajakumar, who was also present during the launch, said the project was planned for three years with an aim to control pollution of the river by intercepting and treating all the wastes from the most polluted stretch of the river, beginning from Iroisemba to Heirangoithong.

As a part of the project, the directorate with other concerned departments will implement a water treatment plant known as Moving Bed Bio Reactor at Monsangei and Samushang, the deputy director said.

When the Imphal Free Press interacted with Brajakumar regarding the development of the rejuvenation and conservation of the river, he informed that 10 crematoriums out of the proposed 56 eco-friendly crematoriums near the river banks have been completed.

The deputy director also said that 20 toilet complexes are to be constructed across 14 municipality wards along the river but till date the department has not allocated appropriate locations for the toilets. Further, he said that soil testing for water treatment plants known as Moving Bed Bio Reactor or Mongsangei and Samushang had been completed. Brajakumar said that the project would be completed within April, 2020.

TheImphal Free Press also interacted with the Centre for Research on Environmental Development (CRED), a non-governmental organisation which collaborates with Imphal Municipal Corporation to carry out the management of municipal waste in Imphal municipality since the year 2007.

Speaking exclusively toIFP, Secretary of CRED, Leikhendro Taoren informed that most of the localities situated near the Nambul River did not join the service provided by CRED to collect solid waste from the municipal areas. Even few families who joined the service failed to pay the monthly fees which compelled CRED to stop its service in the areas.

Taoren said, “Many locals complained that the CRED trucks did not come regularly to collect the waste. But CRED has been facing problems in dumping the waste in the dumping site for different reasons”.

As such, the collection has to be stopped or either delayed, depending on the condition of the dumping site, Leikhendro said. There will be no delay in collecting the waste if they did not face problems in the dumping site, he said.

Some residents explained the reason behind not joining the service initiated by CRED.

One Tilotama Khaidem, a resident near the Nambul river, told theImphal Free Press that many of the families did not feel the need of joining the service provided by CRED since there was no strict ban imposed on dumping of waste in the river banks.

However, after a boat rally was conducted by the locals on July 2 in view of the urgent need of conserving and protecting the river, a meeting was conducted and many of the families have expressed their desire to support the initiatives of the state government to save the river.

Another local, Loken also said that CRED trucks did not come regularly to collect the wastes so the locals have to dump wastes near the river. Besides that, people from other localities often come with cars and dump wastes in the river, he complained.

Further, he informed that after the boat rally local clubs also held a meeting to chalk out means to divert the wastes from crematoriums falling into the river.

Meanwhile, president of All Loktak lake Areas Fishermen’s Union,(ALLAFUM) Khwairakpam Deban said, “A part of the Loktak lake where the Nambul River meets the lake is considered the dirtiest and has different colour”.

Providing a solution to save the river, Deban also said that conserving and maintaining the naturalness of the Nambul river will play a major role in saving Loktak lake too.

If the government can provide boating facilities in Nambul river, there is a high chance that people will avoid dumping waste in the river banks, he said.

The reason is that people are likely to feel ashamed of dumping waste if boating service is started in the river, Deban said.

When the proprietor of SJ Plastic Agency, Sadokpam Itombi was intimated about the large-scale dumping of plastic bottles in Nambul river, he told Imphal Free Press that he is aware about the situation through the media and social media.

Itombi said that he is ready to collect the plastic wastes scattered in the river in whatever means possible after the COVID-19 pandemic is over.

“I am ready to collect as much plastic wastes in Manipur to recycle them,” he said.

It may be mentioned that Itombi has been running a plastic recycling agency in Manipur since 2007. His agency produces flower pots, mineral water bottles, and water pipes from recycled plastic wastes.

In a bid to save the river, a boat rally was conducted in the river stretch from Imphal to Bishnupur district on July 2 by the locals. During the journey, the campaigners, using loudspeakers, attempted to spread awareness on the importance of conserving the river to many of the villages and localities thriving along the river. Supporting the initiatives, people from different localities came out to the river banks and showed encouragement to the campaigners. But will the show of solidarity help save the river?

During the rally, wastes mainly empty plastic bottles were seen floating in the river throughout the journey. Wastes disposed of at the river banks were seen at almost every locality of Imphal areas. The river itself and the surrounding areas itself produces an unpleasant smell.

During the boat rally, it was also observed that many toilets were constructed at the river banks where the wastes could possibly flow directly into the river. Although there was less wastes/ garbage dump at the river banks, empty water bottles and other plastic items carried forward by the river water could still be seen till Bishenpur district, where the boat rally with the campaign to “ Save Nambul River’ culminated.

The deputy director, Directorate of Environment and Climate Change, in his speech as a part of “ Save Nambul River’ campaign, said that three streams flowing from Kangchup hills with a distance of 47 km, 27 km and 18 km respectively joins at Iroishemba to form the Nambul river.

Brajakumar said that the river stretch from Iroishemba to Heirangoithong at a stretch of 9.14 km is the most polluted zone in the river. The problem remains unsolved as many families living along the river do not want to pay money for carrying away their wastes since they can dump the same on the river banks. Thus lies the fate of Nambul river, once the economic lifeline of the state.