The AR troops provided assistance to the children of ‘The Mission Blind School’ located at Heikakpokpi, Kakching district on Tuesday. 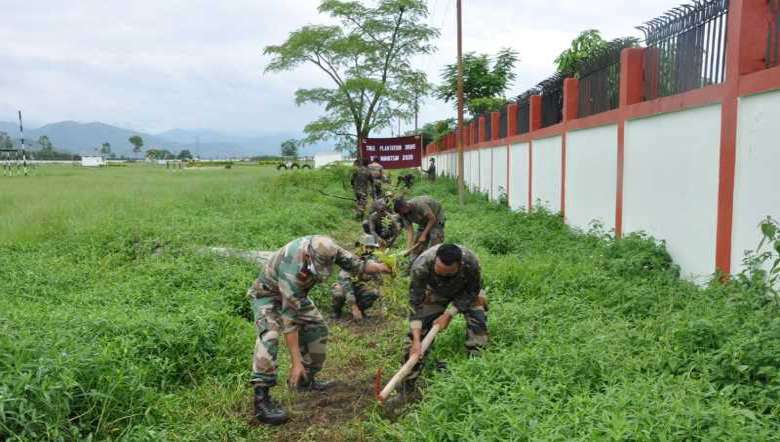 Troops of Assam Rifles under the aegis of HQ IGAR (South) have planted more than 42,000 saplings this year till date, said a press release issued by IGAR (South).

In the Van Mahotsav week from July 1-7, a total of 6,000 saplings have been planted, it said. As part of the Van Mahotsav, Assam Rifles continued the afforestation drive for a week with an aim to retain the vanishing forest cover and to raise awareness on the importance of a healthy environment, said the release. A total of 6,000 saplings were planted in the Kana valley and Samtal salient, it added.

On Wednesday, the troops at Chingmeirong planted a total of 375 saplings of multiple varieties mostly fruit bearing plants prepared by themselves at their own newly created nursery, it said. The event commenced with a lecture on ‘Importance of trees to control global warming followed by tree plantation, it added.

The release further added that the AR troops have also collected 2000 saplings from the forest department, Thoubal and kept them in nurseries at various locations to ensure that the tree plantation drive continued for more time to come.

Meanwhile, troops provided assistance to the children of ‘The Mission Blind School’ located at Heikakpokpi, Kakching district on Tuesday, added the release. The school was running short of supplies and approached Assam Rifles for help, it said.

The AR troops provided necessary supplies including rations, medical assistance, gloves and masks for students, said the release. The students were also briefed about various precautionary measures like maintaining basic hygiene, sanitation, maintaining social distance and other precautions to avoid spread of disease, it added.