Th Radheshyam appealed to the stakeholders to create mass awareness about e-governance among the masses including those residing in the far flung areas. 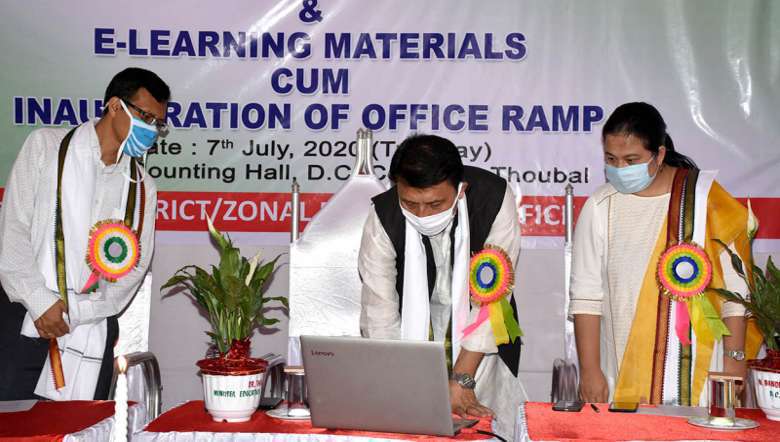 Speaking as the chief guest he emphasised on the importance of the e – world and stated that the ‘e’ which stands for electronic has become an indispensable part of the present life. The electronic gadgets and technology has become a medium of communication and other means of business. Appreciating the officials of the department for their tireless effort, the minister also appealed to the stakeholders to create mass awareness about e-governance among the masses including those residing in the far flung areas.

Speaking on the COVID -19 scenarios, Th Radheshyam emphasized on the importance of educating the young minds about COVID-19 to make them stay safe and fight against the virus. He stressed on the need to create mass awareness and educate the common public on the Standard Operation Procedure (SOP) to safeguard oneself. He also urged the people to maintain self discipline and added that education is not only to gain knowledge but also to live and let others lead a meaningful life.

Director Education(S), Th Kirankumar informed that the launching of website, e-office and e-learning materials is an initiative to create a platform to reach out to the students and teachers. Highlighting the developments of the department, he said that the recently launched digital e-content based website www.lairik.net / www.laireek.net has become a repository of e-learning materials with e-contents prepared by nearly a thousand teachers for each subject. E-textbooks have already been uploaded on the website. He further added that important notes, answer to textbook questions for each chapter will be uploaded soon in a phase wise manner.

Th Kirankumar said that a television channel meant only for Manipur will be initiated through Jio Tv. On top of this e-contents will also be uploaded on Swayam Prabha, DIKSHA portal of MHRD in the next few days.
Deputy Commissioner, Thoubal  N. Bandana Devi said that 80% of the people from Thoubal District, who were residing in different parts of the country, have now returned in the state.  She said that the quarantine centres in the district may be reduced to one in each respective Assembly Constituency as per requirement since most of the returnees have already completed the quarantine period and returned to their respective residents. She added that the educational institutions that were once used as quarantined centres will be vacated and fully sanitized to make it ready for reopening as and when the government decides to begin the normal classes.
ZEO, Thoubal, Arambam Anilkumar stated that the E-learning materials that have been availed in the form of DVDs have been burnt from the very ones developed by the Directorate of Education(S) in partnership with Samagra Shiksha Manipur to reach out to the maximum students. The feature of E-Office will surely facilitate all the teaching and non-teaching staff under the district office to an extent generally in terms of expediency, physical effort to reach the office and transparency, he added.

The launching programme was attended by the officials concerned of department, District Administration, Thoubal teachers among others. Face masks and hand sanitizers made by the District/Zonal Office was also distributed.