The landslide on the Imphal-Tamenglong road serves as the only lifeline and connectivity for various communities living in the area. 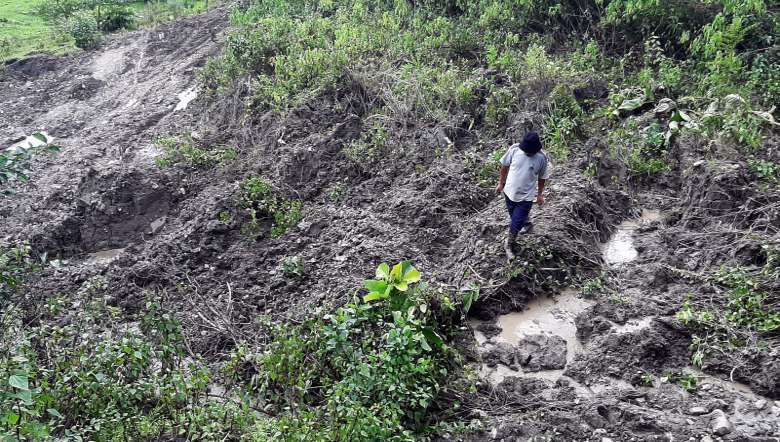 A landslide swept away a part of Imphal-Tamenglong road on July 6, 2020 (PHOTO: IFP)

Over 30,000 people residing in Twilang area under several assembly constituencies from Kangpokpi, Tamenglong and Senapati district were completely cut off as a massive landslide cut away a part of Imphal-Tamenglong road commonly known as Twilang road on Monday.

The landslide on the state’s oldest highway, Imphal-Tamenglong road, which serves as the only lifeline and connectivity for various communities living in the area affected around 150 meters of the Twilang road. Approximately 40 meters of the road located in between 10 miles Poudel Basti and 13 Miles Thonglang Atongba, at a distance of 20 km from Kangpokpi district headquarters was totally swept away by the landslide.

The landslide damaged 10 residential houses of Thonglang Atongba. Speaking to the media at the spot this afternoon, chairman ‘Joint Monitoring and Development Committee on IT Road Kangpokpi to Tamei’ Lutngam Manlun said that it has become tremendously insufferable for the people of Twilang area as the area has been completely cut off from the rest of world at this critical juncture of the pandemic COVID-19.

The chairman said as the landslide has cut off the area, it has severely impacted the ferrying of inmates or returnees for surveillance at the 14 community quarantine centres set up in the area apart from tremendously affecting the people as the road is the only lifeline of the people.

He also said that if the road is not reconstructed at the earliest, many health-related issues are likely to come up as it had already rendered immense hardships in the functioning of health centres under PHC T Waichong as movement of vehicles could no longer take place.

Joint Monitoring and Development Committee on IT Road Kangpokpi to Tamei Chairman drew the attention of government, authorities concerned and elected MLAs, minister of the area to restore the road swept away by the landslide apart from revamping the highway at the earliest.

Meanwhile, vice chairman Thonglang Atongba Village Authority Kohopou Charenamei said that apart from initiating an immediate action to reconstruct the road swept away by the landslide, the government and authority concerned must also look into the grievances of the affected villagers of Thonglang Atongba whose houses are in the verge of collapse by providing relief materials, etc.

He also said that despite the Twilang area (IT Road) being under Tadubi, Tamei, Kangpokpi and Saitu assembly constituencies having three ministers and one MLA in the present government, nothing has been initiated for the state’s oldest highway.

It was reported that no officials and government representatives visited the spot till today despite informing them about the incident, the moment it occurred.

‘Joint Monitoring and Development Committee on IT Road Kangpokpi to Tamei’ chairman Lutngam Manlun and vice chairman, Village Authority Thonglang Atongba Kohopou Charenamei are also concerned of the outcomes if any inmates under surveillance at the community quarantine centres in the area and the general public happened to be suffering from any health issues

The leaders fervently appealed to the state government and authority concerned to take up immediate measures to restore the highway at the earliest so as to avoid such occurrence apart from the public grievances amid the COVID-19 crisis in the larger interest of all.