Fear of community transmission of COVID-19 in Manipur

Many people were concerned about people released on home quarantine but later on found positive, and rightly so as if such persons are super spreaders, they could have spread to quite a few others, especially if the quarantine regime is not strictly followed. 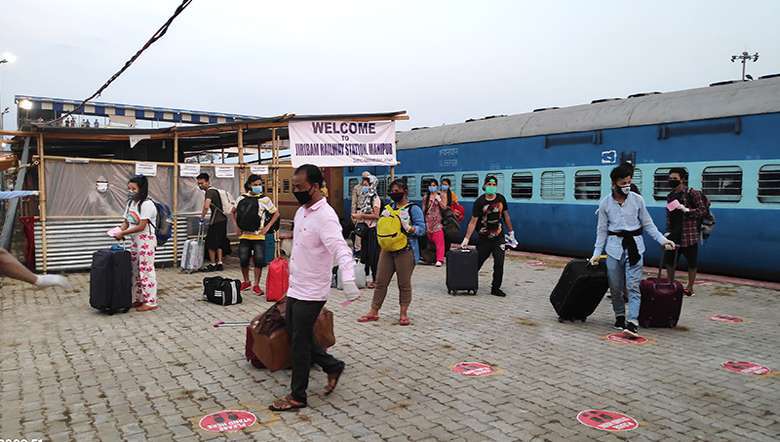 Community transmission is when there is no clear source of origin of the infection in a new community and happens when one can no longer identify who became infected after being exposed to someone who interacted with people from the originally infected communities. It means that the source of infection for spread of an illness is unknown or a link in terms of contacts between patients and other people could not be established. In the case of Jiribam, one ASI had reportedly gone to Silchar for medicare of his wife and child and it is suspected that he got the infection from there. The issue is when he had a travel history of crossing the state boundary, why was he not placed under institutional or community quarantine? Though there are claims that he was under home quarantine, he was allowed to join duty and performed his duty. This indicates a system failure but it seem more likely that the SoP laid down is not followed strictly. The head of the police there should have insisted that he must be in institutional quarantine when he returned from Silchar, and if that was done the number of positive cases would have been much lesser.

On the other hand local transmission means that the source of infection is identified within the reporting location, say in this case Jiribam. Many also use the term lateral transmission but COVID-19 is spread only through lateral transmission through contacts with infected persons as it is till the present day there is no report of vertical transmission which happens in the case of HIV/AIDS, Hepatitis B, Syphilis etc where the infection is passed on from mother to child either in utero, perinatal or post natal physical contact and even through breast milk.

The ASI is what is called super-spreader as out of about 189 contacts identified, 37 were found positive, including a close associate, the lab technician who took samples for testing typhoid and 35 of his colleagues in the department. The doctor who attended to him when he developed symptoms and suspected to be a case of typhoid had also failed in his duty as he did not report the case. Only when the test turned out negative, that he came for further examination and that is when he was suspected to be a case of Covid-19 and tested which turned out as positive.

The only debate in this case is whether he had got infected from Silchar and if that is confirmed, technically this is not a case of community transmission as all the cases later tested positive were linked to him. The authorities would have a tough time in identifying the contacts of all the 37 cases and the number may be large though confined in a fairly small geographical location. Suspected areas are contained and anyone having symptoms will have to be taken out in quarantine centres or isolation wards. If possible all those contacts must be tested which is a costly affair. A stitch in time could have saved nine, but the failure of the authority in Jiribam had led to this situation.

There are also cases of returnees who have been released from the quarantine centres but later found positive and had to be picked up for accommodating in the Covid Care Centres or isolation wards. The good luck is that none of the close contacts with such persons were found positive on testing, thereby indicating that there is no transmission. The case of Thangmeiband Polem Leikai is such a case; where the parent was found positive but the child was not retained there but released for strict home quarantine. Later he was tested positive. Technically the child should have continued in the quarantine but without parents it is difficult to do so and the option is to release the child for strict home quarantine or to retain the child with a relative who had no travel history. The authority chose the former and unfortunately it led to the area being contained. There is a debate going on how the child who tested negative could be found positive in a short time and the answer may be either that the first test gave a false result or that the child contracted the disease from the parent much later and the viral load at the time of first test was too low for detection.

Many people were concerned about people released on home quarantine but later on found positive, and rightly so as if such persons are super spreaders, they could have spread to quite a few others, especially if the quarantine regime is not strictly followed. In many quarantine centres there are local or cluster spread and despite denials by the authorities formally, many in private accepts this facts. This is caused by the bringing in of large number of returnees at one go, leading to the inability of the system to cope up with. The testing capacity was low then at about 400 per day when the returnee started arriving though now it has gone above 2,500 per day. Due to the low testing capacity, the inmates in the quarantine centres were kept for long period waiting for the result, which one inmate says is like waiting for Godot.

To cope up with the situation, orders were passed to allow people whose result is yet to be received but had completed 14 days institutional or Community quarantine to go for home quarantine as also the case of the air travellers. But fortunately the student bodies intervened and the government acquiesced to their demand and only those tested negative are allowed to leave for home quarantine. Such ad hoc approach had created lots of confusion and misunderstanding among the general public. And make one wonder whether scientific advice was sought before such orders were issued. If the advice of the Health Department to bring in one train per week was acceded there would not have the confusion in which Manipur was there for more than a month after the first Shramik Special trains arrived till the first few days of July. Jiribam had handled nonstop in a day even three or four trains; and one can visualise the pressure and strain on those involved in processing the returnees.

Even in the case of the ASI in Jiribam, though he had done his duty at the train station, the chances of picking up the infection there is low provided he followed the SoP, as none of those who worked alongside from other departments and volunteers got infected and his picking up the infection while processing the returnees can be ruled out. Thus the suspicion that he got the infection in Silchar has merit, though from whom, will be difficult to trace out now and for the present it is not that relevant. Despite this, the transmission in Jiribam as the Health Department claims is local transmission and not community transmission is technically correct. But the concern in everyone’s mind is whether there are contacts from other parts of the district or elsewhere which could not be recollected now and quarantined but who can become a spreader elsewhere. This will always be behind one’s mind and this suspicion cannot be assuaged by the words of the experts. However from the common man’s point of view there is community spread as the infection has spread within the community, beyond the returnees and those in the quarantine. This belief will be difficult to dispel and it need a serious effort to make the people aware of the technical aspect of epidemiology; not an easy proposition. It is a question of semantics but very worrisome.

It was repeatedly emphasised that the preparedness was full of shortcomings and the state was swamped by the disaster and the inability to provide training to the frontline workers is haunting us now. Even now, those working in the frontline are not clear about the implications of various acts. And it is only information and knowledge that can help in combating the disease. We are slowly learning from the experiences and our knowledge will broaden with the passage of time but the basic safety measure must be put in and followed to the core to safeguard from the disease. Or Manipur may become a hotspot for the disease which will consume many lives till herd immunity sets in, which as per simulation models indicate an infection of nearly 50% of the population.