The decisions was taken up as a part of agitation against the state government’s failure to implement the 7th Pay for the government colleges and technical institutes teachers, said FEGOCTA general secretary N Somorendro. 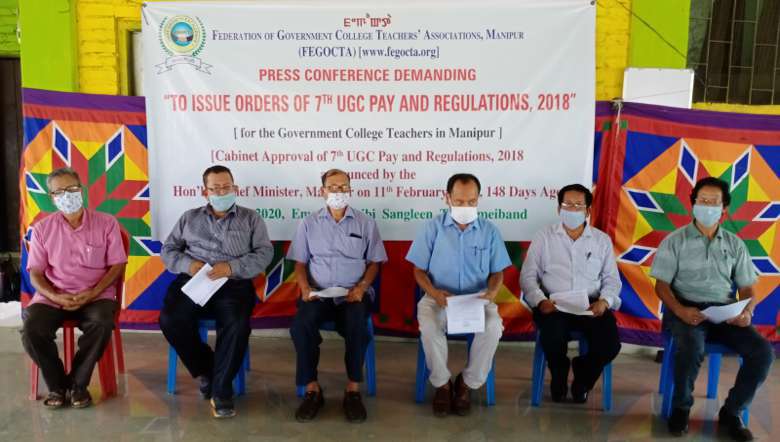 The Federation of Government College Teachers’ Association (FEGOCTA), Manipur has suspended the online classes and boycotted the examinations, admissions and other academic activities of government colleges.

The decisions was taken up as a part of agitation against the state government’s failure to implement the 7th Pay for the government colleges and technical institutes teachers, said FEGOCTA general secretary N Somorendro while briefing to the media on Tuesday at Ema Panthoibi Sanglen, Thangmeiband.

Asserting that the state cabinet had already approved the 7th UGC Pay and Regulations, 2018 as announced by the chief minister on February 11 this year, Somorendro said it is very unfortunate that the government has not passed the order till today.

Somorendro said the college teachers who are working in the quarantine centres will be performing their duties with black badges and the association will support the movement of Manipur Government Services’ Federation (MGSF) which has around 1,40,000 members.

However the agitation by FEGOCTA will not cover the duties or activities coming under the Disaster Management Act, 2005, the general secretary said.

Stating that FEGOCTA still has great hope and faith that the government will implement the 7th Pay, he appealed to the government to bring an amicable solution by issuing order of 7th UGC Pay and Regulations, 2018.

Without implementing national policy of UGC and Priority to HRD in Manipur, Prime Minister Narendra Modi’s mission of ‘Sabka Saath, Sabka Vikas,’ ‘Sabka Vishwash’ and ‘Atma Nirbhar Bharat’ will not be able to achieve, Somorendro added.

A written complaint will also be submitted to the President and Prime Minister of India for such misleading Act, he further added.

Meanwhile, All Tribal Students’ Union, Manipur general secretary Seiboi Haokip suggested the government to introduce a scheme for distribution of smartphones for those poor students who could not afford to purchase and take up steps to make mobile networks available in all rural areas of Manipur.