FEGOCTA president A Pishak Singh alleged that though the state government had passed an order for implementation of 7th UGC pay for government school teachers on July 3, the authority concerned failed to issue pay slips till date. 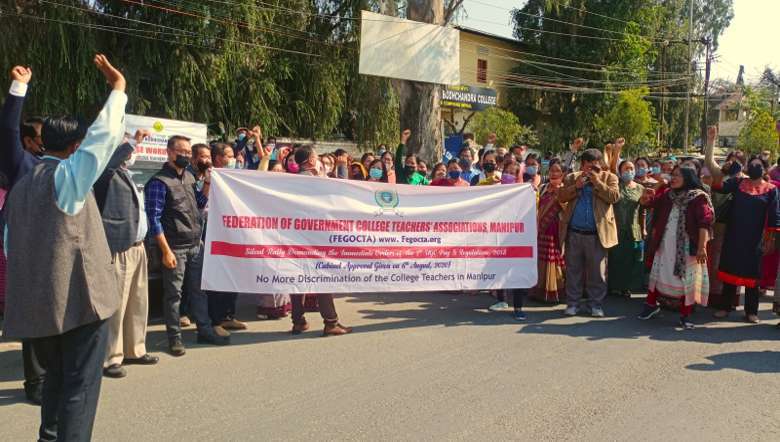 Demanding authority concerned to issue the 7th UGC pay slips of the government college teachers by November 27, the Federation of Government College Teachers' Associations, Manipur (FEGOCTA) has warned authority concerned of launching various forms of democratic movement if their demand is not met on or before the said dateline.

During a press conference held at Manipur Press Club on Saturday, FEGOCTA president A Pishak Singh alleged that though the state government had passed an order for implementation of the 7th UGC pay for government school teachers on July 3, unfortunately the authority concerned failed to issue pay slips till date.

The government even failed to reply to the clarification sought by the accountant general office even after two months, he added.

He further said that meeting of the executive committee of FEGOCTA with the leadership and members of Teachers’ Associations of the Government Colleges, Manipur held on November 12 had resolved to launched various agitation if state government didn't issue 7th UGC pay slips of the government college teachers latest by November 27.

Pishak Singh said that there is no response to the requests made by FEGOCTA to the concerned authorities including written submission on November 3.

Viewing such an indifferent attitude towards college teachers, they feel cheated, meeting expenditures with 6th pay on the same rising prices and without the increased rates of DA, he asserted.

He continued that the government seems to be using delaying tactics on the national policy of 7th UGC Pay approved by the Union Cabinet headed by  Prime Minister Narendra Modi. Why the government college teachers of Manipur be left out of the Prime Minister’s Sabka Saath, Sabka Vikas and Sabka Vishwas in the Election time? Why is there failure to implement four Cabinet decisions on 7th UGC pay in Manipur since 2019, he asked.