The programme was organised by Directorate of Extension Education, CAU, Imphal under the sponsorship of ICAR- National Academy of Agricultural Research Management, Rajendranagar (ICAR-NAARM), Hyderabad. 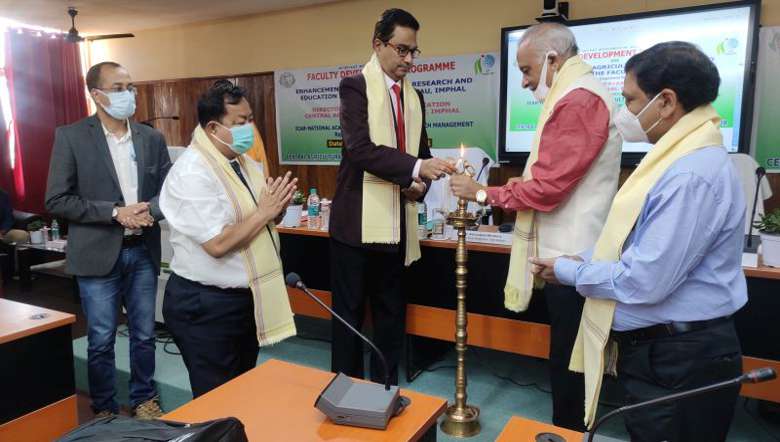 A five-day long faculty development programme on "Enhancement in agricultural research and education for faculty of CAU, Imphal" was launched on Monday at Central Agricultural University (CAU), headquarter, Lamphelpat, Imphal.

The programme was organised by Directorate of Extension Education, CAU, Imphal under the sponsorship of ICAR- National Academy of Agricultural Research Management, Rajendranagar (ICAR-NAARM), Hyderabad.

Attending the function as chief guest, Vice Chancellor of CAU Anupam Mishra extended his gratitude to ICAR-NAARM Hyderabad for conducting such a valuable program which will help enhance skills of faculties working in 13 different colleges of Central Agricultural University located in seven north east states of India.

He said that due to ongoing pandemic, faculties had faced a lot of challenges in providing online classes. As such it is high time to develop new teaching methods for better performance, the VC said.

Director, ICAR-NAARM, Hyderabad, Ch Srinivasa Rao, who attended the function as president, assured to extend his best possible effort to reach out the areas like north east and some union territories with an objective to reach out unreached areas.

He also emphasised the significance of faculties of agricultural universities to increase the income of farmers.