The prime minister held review meeting with over 40 districts, including Jharkhand, Manipur, Nagaland, Arunachal Pradesh, Maharashtra, Meghalaya, and other states with less than 50 per cent coverage of the first dose and low coverage of the second dose of Covid vaccine. 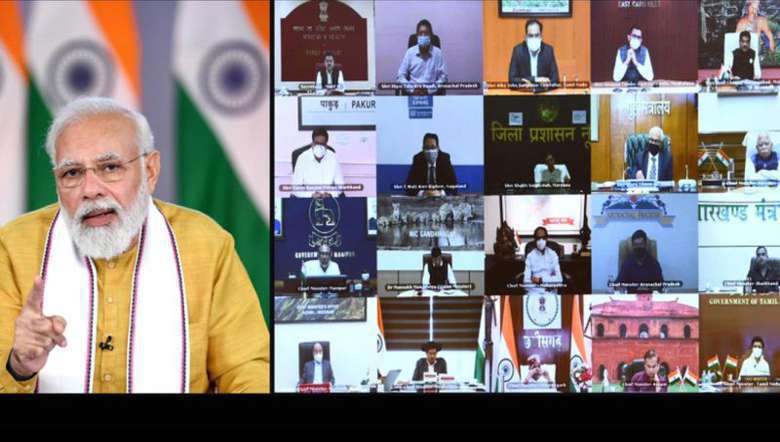 Prime Minister Narendra Modi on Wednesday held a review meeting with district magistrates of over 40 districts having low vaccination coverage.

The meeting included over 40 districts in Jharkhand, Manipur, Nagaland, Arunachal Pradesh, Maharashtra, Meghalaya, and other states with less than 50 per cent coverage of the first dose and low coverage of the second dose of Covid vaccine, the PMO said in a statement.

During the meeting the district magistrates shared the issues and challenges faced in their districts, including rumours resulting in vaccine hesitancy, difficult terrain, challenges created due to prevailing weather conditions; which has resulted in low vaccination coverage.

PM Modi called for maximising community engagement through religious and community leaders and exhorted all officials to ensure that the country widens its vaccination coverage by the end of the year.

Addressing the gathering, the Prime Minister also thanked the chief ministers present in the meeting and said that their attention will encourage the district to work with more determination.

The Prime Minister urged the administrators to focus more on new innovative ways to increase vaccination in their districts, while maintaining that even the better performing districts had similar challenges but they were met with determination and innovation.

“Develop micro strategies, keeping in mind the experience so far to go for saturation of vaccination by addressing the gaps at local level," the Prime Minister told the officials.

Exhorting the officials to prepare region-wise timetables for local goals, the Prime Minister said “You will have to do your best to take your districts nearer the national average.

The Prime Minister also suggested taking help from the religious leaders to create awareness and prevent rumours and misunderstanding about vaccination.

“Now we are preparing to take the vaccination campaign to each household. With the mantra of  ‘Har Ghar Dastak’, knock on every door, every household lacking the security net of a double dose of vaccine will be approached” PM Modi said.  The Prime Minister cautioned that while knocking on every house, equal attention needed to be paid to the second dose as well as the first dose.

Under the Free Vaccine for all campaign, India created a record of administering about 2.5 crore vaccine doses in a day, this feat bears testimony to India’s capabilities, the Prime Minister added.