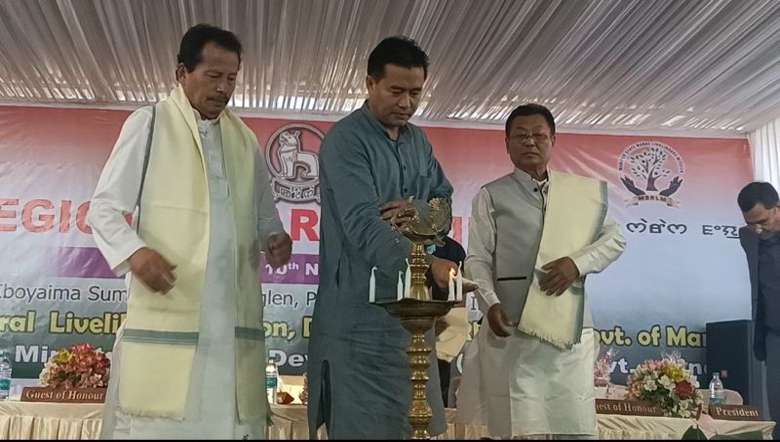 The SARAS Fair is a platform for provides the rural poor, marginal produces (farm and non-farm) opportunity to showcase their products, capacity, ability and skills of livelihood after completion of training, said Rural Development and Panchayati Raj minsiter Thongam Biswajit Singh on Tuesday. The Minister was speaking at the inaugural function of the Regional SARAS Fair, 2021 at Iboyaima Shumangleela Shanglen.

Addressing the inaugural function as the chief guest, Thongam Biswajit Singh said that the stalls in the SARAS Fair are opened by Self Helf Groups under the Village Level Federations.

The minister said that the National Rural Livelihood Mission (NRLM) is one of the most important flagship programmes of the government. The Manipur State Rural Livelihoods Mission (MSRLM) is established in the state to implement the NRLM.

He continued that the MSRLM has already covered eight districts, 27 blocks, 251 Gram Panchayats and 460 villages. He continued that under the MSRLM, 2981 Self Help Groups have been formed, covered 33,204 households and 174 Village Level Federations.

Biswajit further said that members of Self Help Groups should be clear and determined about activities to be taken up after formation of their SHG.

The minister also spoke on the importance of Mission for Economic Empowerment of Traditional Artisans & Craftsmen (MEETAC) and suggested capacity building trainings for the SHGs under MEETAC. He said this will help in improving quality of the products. Further stating that proper packaging is also important in value addition of a product, he further suggested packaging training programmes for the SHGs.

It is quite encouraging that the focus is on local products at the SARAS Fair, he said adding that Prime Minister Narendra Modi’s call is to be “Vocal for Local.”

Thongam Biswajit further sought cooperation from all sections of the society to build a strong Manipur.
MLA Oinam Assembly Constituency L Radhakishor Singh spoke about the need to support the local artisans and said that we should promote and support our local products so as to enhance the livelihood of our rural artisans. He further appreciated the local artisans for their efforts.