Swarnim Vijay Mashaal, which symbolises India’s victory over Pakistan in 1971 War and was flagged off on December 16, 2020, arrived in Manipur on Thursday., . 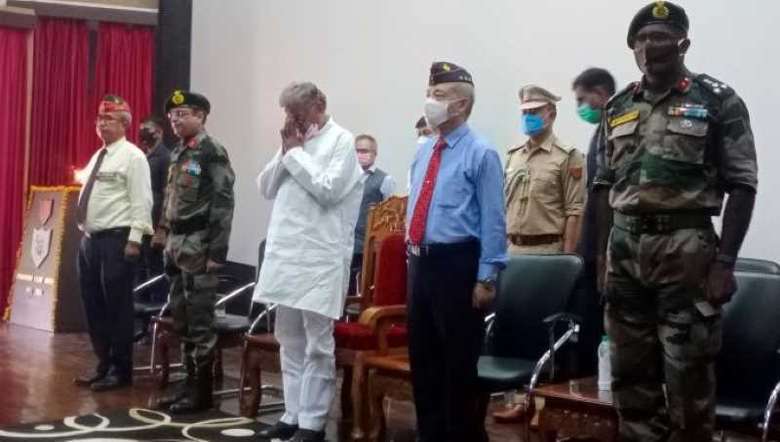 Manipur Governor La Ganesan recieved the victory flame ‘Swarnim Vijay Mashaal’ that arrived in Manipur on Thursday and paid homage to the martyrs of the India-Pakistan 1971 War. He said that the Indian defence force is the best in the world.

Swarnim Vijay Mashaal symbolises India’s victory over Pakistan in 1971 War. The celebration of 50 years of victory ‘Swarnim Vijay Varsh’ was flagged off by Prime Minister Narendra Modi from the National War Memorial in New Delhi on December 16, 2020. The victory flame arrived in Manipur on Thursday and will be installed at Leimakhong Military Garrison till October 18 before its departure for other north-eastern states.

“The Indian defence force is the best in the world as they do not fight with weapons or hands but with a spirit of patriotism,” Governor La Ganesan said at the welcoming of the victory flame function, organised by the Red Shield Division, at Leimakhong Military Base.

After receiving the victory flame, the governor paid homage to martyrs by laying floral wreaths at Shantivan (War Memorial) and planted a sapling as a tribute to all the martyrs of 1971 war.

GOC of the Red Shield Division Major General Naveen Sachdeva said that warfare is evolving and is likely to be technology driven.

With the unyielding will of the Indian soldiers and the dedication of professional military leaders will always be a battle winning factor, he said, adding that winning of the 1971 War in just 13 days is an example.

During the function, the governor felicitated the 1971 war veterans, including kin of L/Nk Albert Ekka, PVC of 14 GUARDS, the only Param Vir Chakra awardee of the 1971 war.