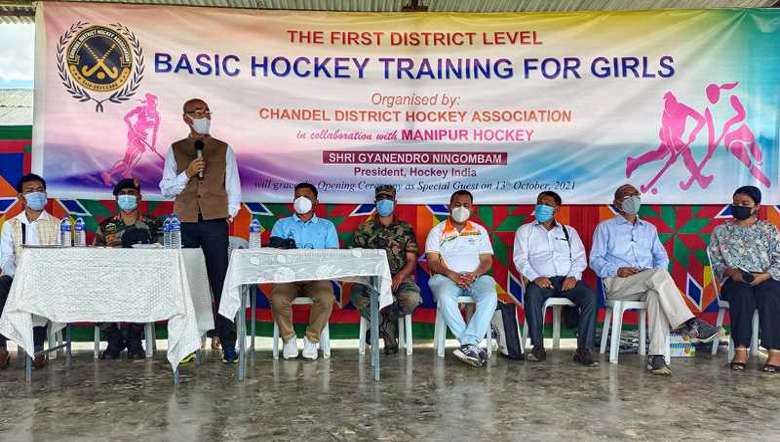 President, Chandel District Hockey Association (CDHA) Ng Gilbert Monsang in speech appreciated and welcomed the president, Hockey India, Gyanendro and team for their visit to Chandel to encourage the newly formed hockey association of the district and the initiative they are currently undertaking to hunt young potential and talented hockey players from Chandel district.

Gilbert also acknowledged and thanked the special invitees for making their presence felt on such an important occasion.

He expressed his gratitude to all the respective club leaders and the young participating trainees for their enthusiastic and overwhelming response during such a short time.

“Hockey has a huge potential and scope among the hill districts given the physical stature and strong stamina we inherit and possess unlike football where height is advantageous,” he said.

He shared his happiness that hockey is introduced for the first time in Chandel and such opportunity should be availed by young girls and boys to craft their talent, skill and represent the district at the state, national and international level one day.

President, Hockey India, Gyanendro Ningombam strongly emphasised the values of dedication and discipline as important hallmarks of success in sports. The three main hurdles to achieve the pinnacle of success are at the district level, state level and national level, he said. If one can overcome these three levels of hurdles, success is bound to come, he added.

He appreciated the CDHA for their efforts and taking such initiative at the grassroot level to promote hockey, the national game of India.