The training programme will be organised in multiple phases of 30 days each. 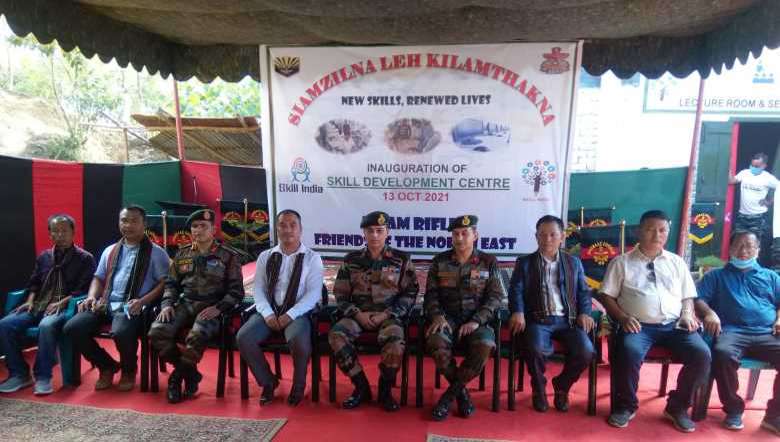 For the first time, a skill development programme called ‘Siamzilna Meh Kilamthakna’ (New Skills, Renewed Life) was launched at an SoO camp and to mark the beginning, a training centre was inaugurated inside the ZRA camp at Muvanlai, New Teikot by IGAR (South) Major General, Alok Naresh on Wednesday.

The inauguration programme of the centre was attended by commander of 27 AR, Brig Ashin Ranjan; CO of 46 AR, Col Viplay Tripathi; ZRO cabinets led by its secretary, Ketheos Zomi; MEA chairman of Zomi Council; Zomi Mothers Association president; and all ranks and file of ZRA.

Speaking as chief guest of the programme, Major General Alok Naresh said that the initiative is to empower the trainees to successfully compete with their counterparts in the professional and social domain.

Calling it a historic day as no such activity had been initiated at an SoO camp in India so far, Alok said that it is just a beginning and such programme may be extended to other SoO signatory camps where industrial training may be imparted with the interest of the cadres.

He continued that the training on computer skills, tailoring, carpentry and others will be given to the cadres of ZRA so as to make them professionally skilled and financially independent. He also thanked the Humanism Foundation that will look after the training process saying that he felt proud to be a part of such an initiative.

Moreover, ZRA/ZRO has made it possible for all those with an interest in moving ahead in their lives. The changing scenario is just like opening a floodgate, he added.

The training programme will be organised in multiple phases of 30 days each. The first phase that commenced on Wednesday will include training on skills like sewing, carpentry and IT training. The subsequent phases will be upgraded to other result oriented skills based on the feedback from the trainees. For the training programme, the Khuga Battalion or 46 AR coordinated with Humanism Foundation which works in collaboration with NSDC. The NGO provided assistance in arranging the equipment and trainers required for undertaking the skill development training.

After the inauguration programme, the ZRO leaders led by its MEA secretary told the media persons that they are thankful to the IGAR (South) for initiating the skill development programme saying that their request has become fruitful after 10 years. Initially, ZRA has four designated camps where there is pigsty and cultivation of spices and rice are done; however, the cadres never received the stipend money on time.

It may be mentioned that ZRO/ZRA are the pioneer UG group to sign the Suspension of Operation (SoO) agreement with the Central government in August 2005. They formed an umbrella organisation called United People's Front (UPF) and the ZRO president became the first chairman of UPF. In August 2008, UPF and Kuki National Organisation (KNO), the two umbrella organisations of the UG group signed a tripartite SoO agreement with the government. As per the terms of the SoO agreement, the first designated SoO Camp of ZRA came up in Muvanlai, New Teikot in September 2010. Approximately, 73 cadres of ZRA are currently residing in Muvanlai camp. The inhabitants are mainly engaged in camp maintenance and other activities like pisciculture, goat farming, paddy cultivation and others.