Anyone can reach out to the chief minister directly at 9534795347 with their grievances or suggestions. 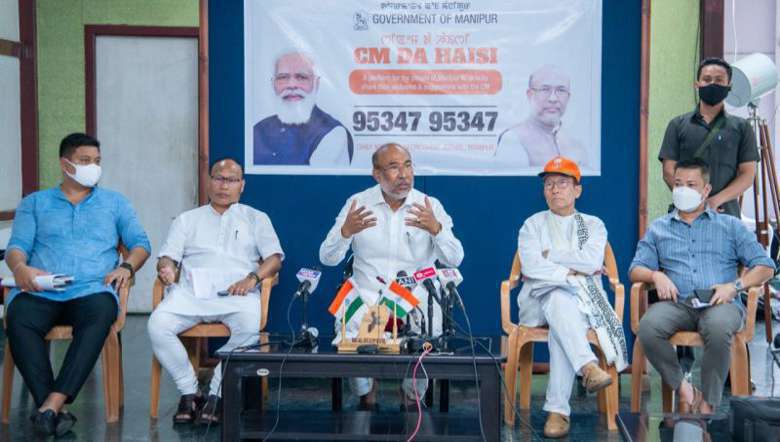 In a series of tweets, the chief minister said, people of the state can reach out to him directly at 9534795347 with their grievances or suggestions. The state government will ensure that the grievances are addressed at the earliest, CM Biren added.

"In our continuous endeavour to engage with the citizens and address their issues as efficiently as possible, I’m happy to launch the “CM Da Haisi” initiative today where anyone can reach out to me directly at 95347-95347 with their grievances or suggestions," CM Biren tweeted.

Mentioning that citizen engagement programs like Meeyamgi Numit/Hill Leaders Day could not be organised due to the COVID-19 pandemic, CM Biren said the 'CM Da Haisi' helpline will enable the citizens to directly reach out to him directly.

"Ever since the pandemic broke out, citizen engagement programs like Meeyamgi Numit/Hill Leaders Day could not be organised. Now, CM Da Haisi helpline will enable the citizens to directly reach out to me and the Govt. will ensure that these grievances are addressed at the earliest," the chief minister said in another tweet.

During the launching programme, the chief minister said that CM Da Haisi is a novel citizens engagement initiative through which he aims to establish a direct contact with the people of the state to enable its citizens to freely share their problems and suggestions with him.

The chief minister informed that the main objective of this campaign is to improve citizen's participation and engagement and resolve the grievances of the people in a time-bound manner. CM Da Haisi aims to reach at least 50 per cent households of Manipur, especially people living in the hill districts, in the next two months. For the first time in the state, the campaign will make citizens of Manipur, an active participant stakeholder in setting the agenda for their government, CM Biren said.

Through the CM Da Haisi initiative, CM Biren seeks to build people's faith in democratic governance and instill in them the confidence that no matter how big or small, personal or institutional - addressing people's concerns will be the priority of the Biren-led BJP government.

"The campaign provides an outlet for the people who are frustrated by the local bureaucracy to directly reach out to CM and get their problems resolved," CM Biren said, adding that, with this platform, he is just a call away from every citizen of Manipur.

CM Biren also mentioned that the initiative was inspired by Prime Minister Narendra Modi who has taken various initiatives and used technology to establish a direct connect with people.

"Anybody can reach out for any problems, small or big whether it is delay in getting certificates, scholarships, ration cards, CMHT cards or getting electricity or water connection, just reach out the number" the chief minister said.

Meanwhile, responding to media questions on the illegal entry of Myanmar nationals into the state, CM Biren said that the matter will be looked after by a special cell opened under the police department.

"One special cell has been opened at Moreh to check entering. While people of the state who are involved in making fake Aadhaar cards will not be spared, legal action will be taken up against them according to law.

The chief minister also appealed to the intending candidates for the upcoming election to maintain peace, harmony and democracy while conducting election campaigns.

A notice to deposit the licence gun will be notified soon, Biren added.