The Manipur governor strongly urged the district administration to reach out to the masses for Covid vaccination programme and get citizens vaccinated. 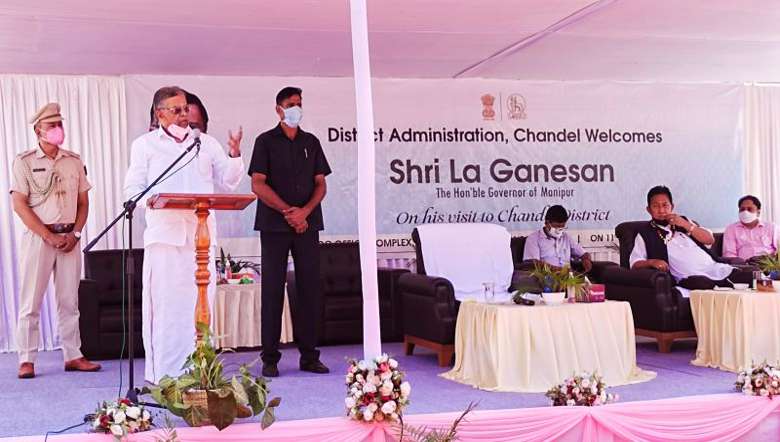 Manipur Governor La Ganesan on Monday visited Chandel in his first public interaction after taking responsibility as new governor of the state recently.

The district administration Chandel under the supervision of deputy commissioner Mayanglambam Rajkumar welcomed the visit of the governor in a colourful and grand manner.

M Rajkumar gave a detailed report of the many achievements, projects undertaken by the district administration so far in the district. He also highlighted some of the developmental works which are still being carried out including in the far flung rural areas of the district.

La Ganesan in his maiden speech, emphasised the significance of sports and art culture which Manipur was and is known for. He appreciated the people of Manipur for giving sports and arts due importance and urged the people to keep the spirit alive and intact.

He shared a few anecdotes from Hindu mythical stories to give a sense of the importance of cleanliness as an instrument to keep the environment and society clean. He urged the public gathering to pursue good work and contribute to the well-being and development of the society. He strongly urged the district administration to reach out to the masses for Covid vaccination programme and get citizens vaccinated. If not 100 percent but at least 90 per cent of the Chandel population should be vaccinated, he added.

His speech was followed by interaction with district level officers and leaders and representatives of civil bodies. The interaction session witnessed notes of appreciation from civil body leaders for his visit to the district and choosing Chandel as his first official public visit and interaction.

He assured that the memorandums submitted by various civil body leaders will be looked into, and took time to respond to the few queries and appeals made by the leaders during the interaction session as well.

The programme concluded with a vote of thanks given by additional deputy commissioner Ksh Siddhart, thanking the governor and his visiting team for coming to Chandel. He also thanked all the DLOs and ICDS for the refreshment and lunch preparation, CVO leaders, tribe leaders, student leaders and press media for making the programme a grand success.

Another noteworthy of the historic visit by the governor apart from the interaction session was the remembrance and acknowledgement of the 1999 Kargil War martyrs who sacrificed their lives for the nation from Chandel district.

The family members of late Chara Nicholas Moyon of Heigrutampak village and late Ng Beningvir Moyon of Khukthar village belonging to Naga Regiment were handed a token of gratitude by governor La Ganesan. Caretaker chairman, ADC Chandel, D Ringo Lamkang, secretary to the governor Bobby Waikhom were some of the important dignitaries of the day.